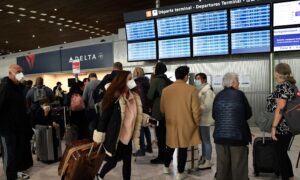 EU 'Disapproves' of Trump Banning Travel From Some European Countries
0 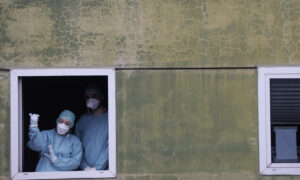 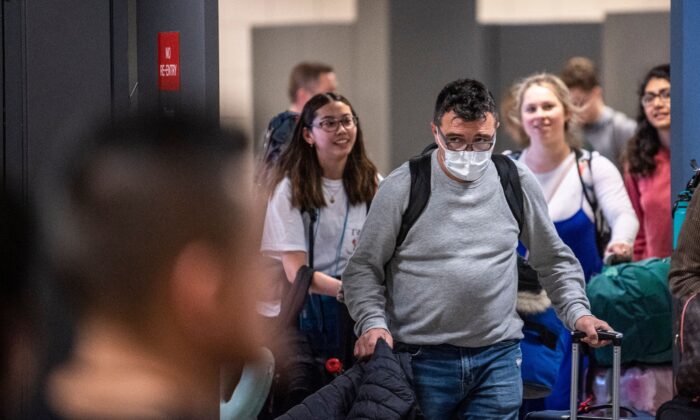 A passenger arriving from Brussels wearing a mask to protect himself from the new coronavirus looks for his relatives in the International arrivals zone at Dulles Airport outside Washington on March 13, 2020. (Eric Baradat/AFP via Getty Images)
UK

US Coronavirus Travel Ban Expands to Include UK and Ireland

The United States expanded the travel ban to include the United Kingdom and Ireland, effective midnight Monday.

President Donald Trump implemented the ban for most European countries this week because of the explosion of coronavirus cases there.

“All of our health experts presented information” and “made a unanimous recommendation to the president that we suspend all travel from the UK and Ireland,” Vice President Mike Pence, head of the White House Coronavirus Task Force, said in Washington after a task force meeting on Saturday.

Trump said earlier in the press conference that his administration was considering other travel restrictions.

“They’ve had a little bit of activity, unfortunately,” Trump said when asked about the United Kingdom and Ireland.

Acting Secretary of Homeland Security Chad Wolf said that the decision was made due to “the rising number of cases” in the UK.

“These restrictions bar travel for certain foreign nationals who have been present in the UK or Ireland in the past 14 days,” he said. The restrictions don’t apply to U.S. citizens, officials said, but they will be funneled to certain airports for screening.

Trump on Wednesday said the Schengen Area countries, which include France, Germany, and Italy, failed to implement travel restrictions against China, where the virus started before spreading around the world, unlike the United States.

“The European Union failed to take the same precautions to restrict travel from China and other hotspots. As a result, a large number of new clusters in the United States were seeded by travelers from Europe,” Trump said.

Other countries in the region, including Switzerland, Norway, and Sweden, have faced rapidly escalating case counts in recent days.

Top U.S. health officials said that the travel ban against Europe made sense because over 70 percent of the new cases in America are linked to Europe.

Patients from Europe are “seeding other countries,” Dr. Anthony Fauci, director of the National Institute of Allergy and Infectious Disease, told lawmakers, including the United States.

“So it was pretty compelling that we needed to turn off the source from that region,” he said.

Fauci said on Saturday that the travel restrictions were prompted by the epicenter of the virus moving from China, where the virus started, to Europe.

“When this is all over, and this will end, you will see a curve of how the coronavirus outbreak evolved,” he said, noting that cases have dropped sharply in both China and South Korea.

Domestically, cases will rise but will fall at some point, he added.

Trump told reporters that people shouldn’t take trips if they don’t have to.

“If you don’t have to travel, I wouldn’t do it,” Trump added when asked if people should be traveling, given the situation with the virus, after the Pentagon ordered a halt to domestic travel.

“We want this thing to end. We don’t want a lot of people getting infected. We want it to end and end as quickly as possible,” he added.