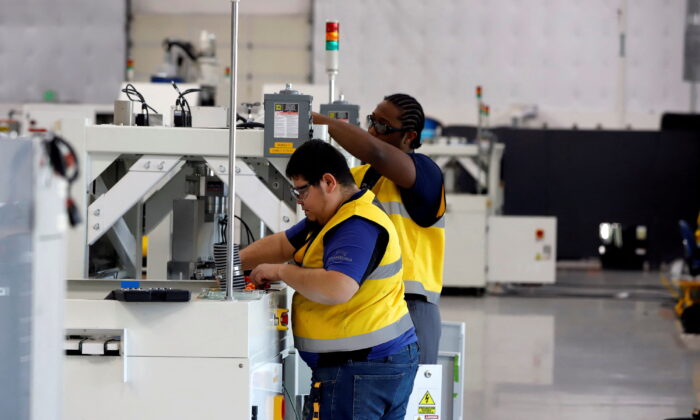 WASHINGTON—New orders for U.S.–made capital goods increased in July, but the pace slowed from the prior month, suggesting that business spending on equipment could struggle to rebound after contracting in the second quarter.

Orders are slowing as the Federal Reserve’s aggressive monetary policy campaign to fight inflation dampens demand. But manufacturing, which accounts for 11.9 percent of the economy, remains supported by still-low inventories of long-lasting manufactured goods like motor vehicles.

There were increases in orders of machinery, fabricated metal products as well as computers and electronic products in July. But orders for electrical equipment, appliances, and components fell as did those for primary metals.

Business spending on equipment declined at a 2.7 percent annualized rate in the second quarter, the most in two years. That, together with a slower pace of inventory accumulation relative to the prior two quarters, helped to weigh down GDP. The economy contracted 1.3 percent in the first half of the year.

Orders for durable goods, items ranging from toasters to aircraft that are meant to last three years or more, were unchanged in July after increasing 2.2 percent in June.

They were restrained by a 0.7 percent decline in orders for transportation equipment. Orders for civilian aircraft soared 14.5 percent. They were, however, offset by a 49.8 percent plunge in orders for defense aircraft. Boeing reported on its website that it had received 130 aircraft orders compared to only 50 in June.