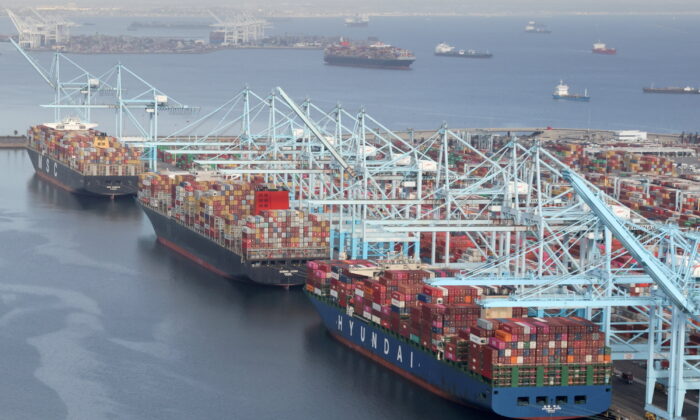 Shipping containers are unloaded from ships at a container terminal at the Port of Long Beach-Port of Los Angeles complex on April 7, 2021. (Lucy Nicholson/Reuters)
Companies

Dave Petratis boosted wages for his U.S. factory workforce in December—six months ahead of schedule for normal annual increases.

The CEO of Allegion PLC, a maker of locks and security doors with 10 factories dotted across the country—including a lock factory in the appropriately named town of Security, Colorado—said ‘we’ve got our finger on the trigger” for another pay hike in coming months.

The multiple increases are necessary amid a fight for talent that has become a central feature of the supply chain crisis, Petratis told Reuters.

“When labor becomes a problem in the middle of something like this—it creates a lot of disruption,” he said, adding that it’s not just the companies that supply him with parts like metal castings that can’t find enough workers to fill all the orders. “It’s truck drivers, it’s people leaving the workforce to retire with heavy experience.”

Surging prices for steel and other raw materials have dogged Allegion and other manufacturers through most of the pandemic, in part because of the stop-and-start nature of the crisis.

After initially shutting down factories and stores, the pandemic sparked demand for goods as home-bound consumers funneled stimulus money into shopping sprees rather than trips and dining out.

But supply snarls continue to hamper producers. Earlier this week, the world’s No.4 carmaker Stellantis told investors that raw materials like metals would remain a problem for the industry this year. But the company said the semi-conductor shortage, which cost the company about 20 percent of its planned production last year, peaked in the third quarter.

A key question for economists now is to what degree inflation coursing through the economy is becoming a circular force, with higher prices at gas pumps and grocery stores fueling demands from workers for higher wages, adding again to pressure for more price hikes. U.S. consumer prices rose at their fastest annual rate in four decades in January.

For now, it remains unclear whether a spiral will be averted, though most Federal Reserve policymakers remain optimistic that inflation will ease as supply chains untangle later this year and into next, although Russia’s invasion of Ukraine may complicate the central bank’s efforts to rein in inflation this year.

Cummins Inc. gave bigger-than-normal wage increases to its factory workers in 2021 to account for heavy inflation pressures, said Jennifer Rumsey, the Columbus, Indiana-based engine maker’s president and chief operating officer. But she noted that prices of some commodities like metals have moderated.

“As a business leader, we don’t want to see inflation spiral out of control, because that would dampen the economy,” she said. “We’re not seeing that at this point.”

There are wider signs that bottlenecks and shortages in supply chains will start easing by the end of this year. The Port of Los Angeles just reported its busiest January in its history and the backlog of ships waiting to unload there is declining.

But U.S. ports have a narrow window to clear the existing backlog before another surge of imports begins in the middle of the year—a cycle that occurs as retailers stock up, first for back-to-school sales and then the year-end holidays. The good news is that the big West Coast ports have said they are making steady progress at moving out containers and fewer workers are off the job for illness or quarantines.

The crisis is prompting some businesses to get creative in how they move their products—changes that should make it easier to deal with future setbacks, such as another twist in the pandemic.

Lazaro Escandel, who co-leads the manufacturing practice at accounting and business advisory firm Kaufman Rossin in Miami, said he has one client who has begun using 20-foot shipping containers and smaller vessels, which can access more ports on the U.S. east coast. Traditional 40-foot containers are more cost effective, but there are fewer ports that can handle them.

Changes like that are driving up costs, adding to inflation pressures, said Escandel. Though not everyone is complaining about that.

“We have clients who are moving less product, less pounds, but they’re getting more revenue for it,” said Escandel. “Some of them like that.”

But inflationary pressures remain a headache for most businesses. Petratis, the Allegion CEO, said he sees an “iceberg” of inflation that still needs to move through the economy. And he noted that tight labor markets will not go away once trains and trucks again deliver goods on time. The labor shortage “will continue to drive inflationary pressure, until disrupted by some type of slowdown or normalizing demand,” he said.

Meanwhile, many businesses wonder whether demand will in fact continue to be supercharged once supply chains normalize.

David Foulkes, CEO of Brunswick Corp., a producer of boats and engines, has squeezed as much as possible out of the company’s existing factories to meet pandemic-fueled demand. In 2021, the company’s engine business produced 108 percent of the units they had targeted in their planning at the start of the year.

Brunswick’s boat business has faced more challenges, but even so ended up making 95 percent of the units they planned for the year. “That 5 percent is totally attributable to supply chain,” said Foulkes.

Foulkes said Brunswick is “carefully” adding capacity to deal with what he sees as a long-term increase in demand. The company added 60 percent to the capacity of a plant in Reynosa, Mexico, and made a similar expansion to a plant in Portugal that serves the European market, he said. It also reopened a mothballed boat factory in Florida.

With those additions and eventually normalization of supply chains, Foulkes projects inventories will be back to “healthy levels” by 2025. “Unless something significant happens, it’ll take two or more likely three years to get inventory levels back to where they should be.”