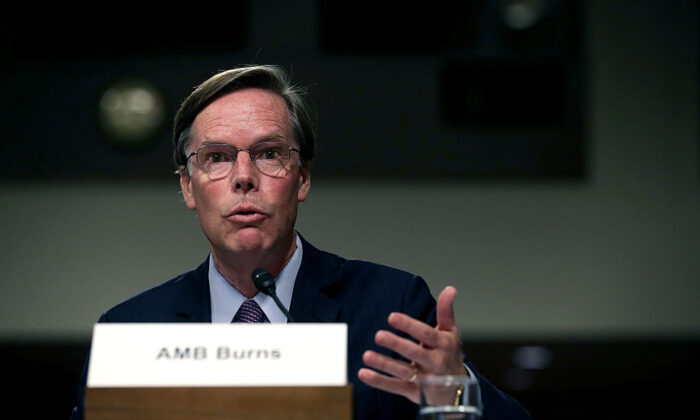 US Ambassador to China Nominee Calls Out CCP’s Aggression

Nicholas Burns, the Biden administration’s nominee to be U.S. ambassador to China, criticized the regime in Beijing during his Oct. 20 confirmation hearing for its display of aggression on the international stage as well as rights abuses in Tibet and Taiwan.

Burns was questioned by members of the Senate Foreign Relations Committee on a host of topics including countering the threats posed by the Chinese Communist Party (CCP), its human rights abuses, the United States’ stance on Taiwan–China relations, and other U.S. interests concerning China.

Burns, 65, said Beijing should be challenged “when it takes actions that run counter to American values and American interests, actions that might threaten the security of the United States or our allies and partners, or undermine the rules-based international order.”

The Biden administration intends to “uphold a free and open Indo-Pacific” by “maintaining America’s commercial and military superiority in 21st-century technologies,” Burns said. He also emphasized holding the CCP accountable for “failing to play by the rules on trade and investment,” its “theft of intellectual property, use of state subsidies, dumping of goods, and unfair labor practices.”

While Burns called the CCP out on its bullying of Taiwan as well as “its genocide, and abuses in Tibet,” he said that the “United States is right to continue its one-China policy.”

The U.S. government and human rights groups have often termed the CCP’s treatment of Uyghur Muslims in its Xinjiang region “genocide,” despite denials from the CCP.

Regarding Taiwan–China relations, Burns proposed helping Taiwan to “maintain a self defense capability.”

If confirmed, Burns said the Biden administration will “cooperate with the [CCP]” on climate change, counternarcotics, global health and, non-proliferation.

Regarding the phase one trade agreement between the Trump administration and the CCP in January 2020, Burns said the CCP should be held accountable for its obligations, which include buying $468 billion of U.S. goods, energy, agriculture, and services over a two-year period.

When asked about options to ensure that the CCP fulfills the terms of the agreement, Burns said that the dialogue should be initiated by U.S. Trade Representative Katherine Tai, who made remarks regarding the issue on Oct. 4.

Burns has worked in Republican and Democratic administrations throughout the 27 years of his career in the U.S. government. He was previously a member of Secretary of State John Kerry’s foreign affairs policy board, served as senior director for Russia, Ukraine, and Eurasia Affairs on the National Security Council, was a special assistant to President Bill Clinton, and as director for Soviet Affairs during the administration of President George H.W. Bush.

“We oppose defining China-U.S. ties as competitive,” he said, adding that he hopes Burns “will speak and act in a more constructive manner.”