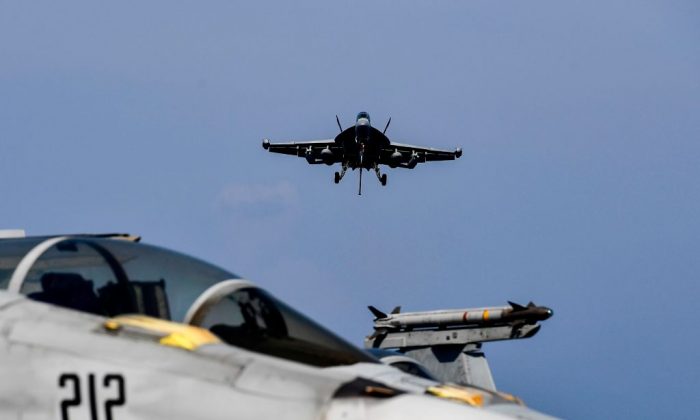 A F18 Hornet fighter jet prepares to land on the deck of the US navy aircraft carrier USS Harry S. Truman in the eastern Mediterranean Sea on May 8, 2018. The USS Harry S. Truman Carrier Strike Group on May 3 began air operations in support of Operation Inherent Resolve, conducting flight operations against the so called Islamic State (IS) targets in Syria and Iraq. (ARIS MESSINIS/AFP/Getty Images)
US News

US Central Command Conducted 36 Airstrikes in Yemen in 2018

The U.S. military conducted a total of 36 counterterrorism airstrikes in Yemen in 2018, specifically targeting al-Qaeda in the Arabian Peninsula (AQAP) and the ISIS terrorist group, according to the U.S. Central Command (CENTCOM).

The airstrikes were conducted between January and September, with no strikes occurring in the following three months, the Jan. 7 report noted. The strikes hit areas in Abyan, al Bayda, Hadramawt, Shabwah, and Zamakh governorates.

In January, CENTCOM conducted 10 airstrikes that targeted both AQAP and ISIS. In February, the United States conducted six airstrikes on AQAP, seven in March, and four in April.

CENTCOM conducted two airstrikes in May, two in June, another two in July, one in August, and two more in September—all targeting AQAP terrorists.

The report highlights U.S. efforts in fighting ISIS, coming shortly after President Donald Trump’s announcement to withdraw about 2,000 U.S. troops from Syria. Despite the pullout, Trump has reiterated his commitment to defeating ISIS.

Turning to Twitter, the president said that troops would still be leaving at a “proper pace,” an apparent response to media reports stating that his intentions in Syria had changed.

“No different from my original statements, we will be leaving at a proper pace while at the same time continuing to fight ISIS and doing all else that is prudent and necessary!” Trump wrote on Twitter on Jan. 7.

Meanwhile, the Combined Joint Task Force said Jan. 4 that they had conducted “469 strikes consisting of 1,001 engagements in Syria” and nine strikes as part of 14 engagements in Iraq. Those strikes took place between Dec. 16 and Dec. 29.

Amid the reports, Trump said the U.S. military had killed Jamal al-Badawi, the man who led the deadly terrorist attack in 2000 on the USS Cole. Al-Badawi was targeted in a strike carried out in Yemen on Jan. 4.

“Our GREAT MILITARY has delivered justice for the heroes lost and wounded in the cowardly attack on the USS Cole,” Trump wrote on Twitter. “We have just killed the leader of that attack, Jamal al-Badawi. Our work against al Qaeda continues. We will never stop in our fight against Radical Islamic Terrorism!”