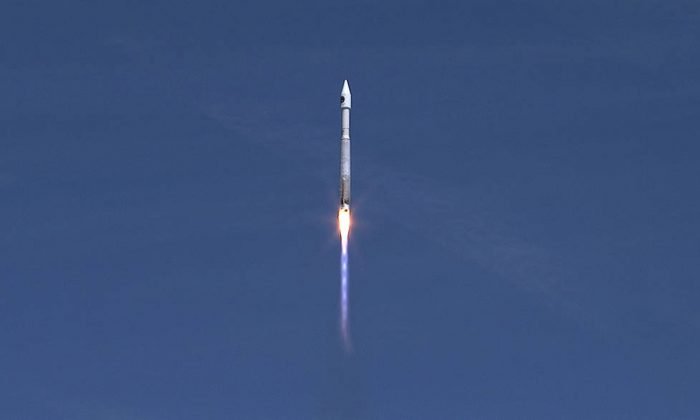 US Cargo Ship Blasts Off for Space Station With Supplies, Experiments

The 19-story booster soared off its seaside launch pad at Cape Canaveral Air Force Station at 11:11 a.m. EDT/1511 GMT. NASA broadcast an unprecedented 360-degree view of the launch via YouTube, in a debut of new video technology.

“A beautiful launch,” said Vern Thorp, a United Launch Alliance manager. “It looks like we nailed the orbit once again.”

Atop the rocket was an Orbital ATK Cygnus capsule loaded with more than 7,600 pounds of food, supplies and experiments for the station, a $100 billion research lab flying about 250 miles above Earth.

The Cygnus is scheduled to reach the station, a project of 15 nations, on Saturday. Its cargo includes a greenhouse that the U.S. National Aeronautics and Space Administration is testing to grow food for astronauts on long missions.

The capsule also carries 38 shoebox-sized satellites and a high school student’s science project that will test how telomeres, which are structures at the ends of chromosomes, are affected by microgravity.

As people age, telomeres tend to shorten. Preliminary results from a study of astronaut twins, however, show the telomeres of former astronaut Scott Kelly, who spent nearly a year aboard the station in 2015 and 2016, actually lengthened during his time in orbit, the opposite of what was expected.

“The researchers are kind of scratching their heads at that,” space station associate scientist Tara Ruttley said during a press conference on Monday.

The Cygnus cargo ship is the seventh of 10 planned missions through 2018 under Orbital’s space station resupply contract with NASA, worth up to $3.1 billion.

Russia and Japan also fly cargo ships to the station.

By the time the Cygnus arrives, the station will have two new crew members.

NASA astronaut Jack Fischer and Russian cosmonaut Fyodor Yurchikhin are scheduled for launch from the Baikonur Cosmodrome in Kazakhstan at 3:13 a.m. EDT/0713 GMT on Thursday, docking at the station about six hours later.