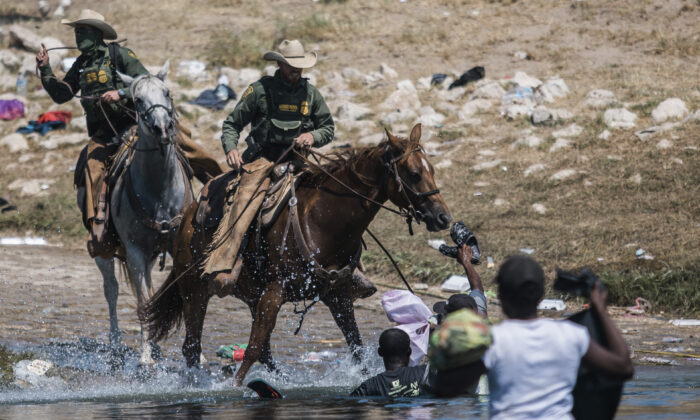 US Border Patrol Agents Didn’t Whip Anyone at Border, Despite Reports: Internal Review

“The investigation concluded that there were failures at multiple levels of the agency, a lack of appropriate policies and training, and unprofessional and dangerous behavior by several individual agents,” states the Office of Professional Review report.

Magnus said during a press conference on July 8 that four agents are facing disciplinary charges, some related to “deeply offensive conduct.”

“One Border Patrol agent who was found to have used denigrating and inappropriate language and to have maneuvered his horse unsafely near a child,” CBP said in a statement.

“Despite the actions taken by certain agents, there was no evidence any migrant was forced to return to Mexico or denied entry to the United States,” Magnus said.

Magnus said agents are now prohibited from “twirling or spinning” their split reins as a distancing technique or in crowd control situations.

Magnus said the report took so long, in part, because the U.S. Attorneys office took months before declining to prosecute the agents involved.

The Biden administration was quick to condemn mounted Border Patrol agents last September as media outlets showed video clips and photographs and accused the agents of “whipping” Haitians after they crossed illegally into the United States; incorrectly calling their reins “whips.”

Department of Homeland Security (DHS) Secretary Alejandro Mayorkas told CNN on Sept. 21, 2021, two days after the incident: “I was horrified by what I saw. We will let the investigation run its course, but the pictures that I observed troubled me profoundly.”

On the same day, he wrote on Twitter that the results of the DHS investigation “will be available by the end of next week & I’ve committed to making the results public.”

He said the agents involved had been placed on administrative duties.

On Sept. 23, 2021, then-White House press secretary Jen Psaki announced that all horse patrol units in the Del Rio Sector had been suspended.

President Joe Biden said: “To see people treated like they did, horses barely running over, people being strapped … it’s outrageous.

The incident occurred as up to 30,000 mostly Haitian illegal immigrants gathered under the international bridge in Del Rio, creating a primitive campsite while they waited to be processed by Border Patrol. The camp was on the bank of the Rio Grande, through which the illegal immigrants waded back and forth to obtain supplies from the Mexican city of Acuña.

“We had a lot of medical emergencies. We had 10 women give birth, there was a miscarriage. We had diabetic emergencies. Some heart issues, dehydration. There was no COVID testing, of course,” said Jon Anfinsen, head of the Del Rio Sector Border Patrol Council.

He said the horse patrol agents were directed to stop people from crossing the river illegally into the United States the day the incident occurred.

Magnus said the request had come from the Texas Department of Public Safety.

Brandon Judd, president of the National Border Patrol Council, told The Epoch Times at the time that horse patrol agents are trained to use their reins to keep illegal immigrants away from their horses.

“The horse patrol agents, under the administration, are trained to ensure the safety of the migrants, to keep them away from the horses, because the horses can harm people—they can inadvertently step on them, they can rear up, they can kick them,” Judd said.

Two months later, DHS provided an update stating that the investigation had first been referred to DHS’s Office of Inspector General (OIG).

“The OIG declined to investigate and referred the matter back to CBP’s Office of Professional Responsibility,” the DHS stated on Nov. 16, 2021.

According to DHS policy, the OIG would have taken up the investigation if it regarded the incident as “serious misconduct.”

In February, Anfinsen confirmed that two of the horse patrol agents involved were still on desk duty.