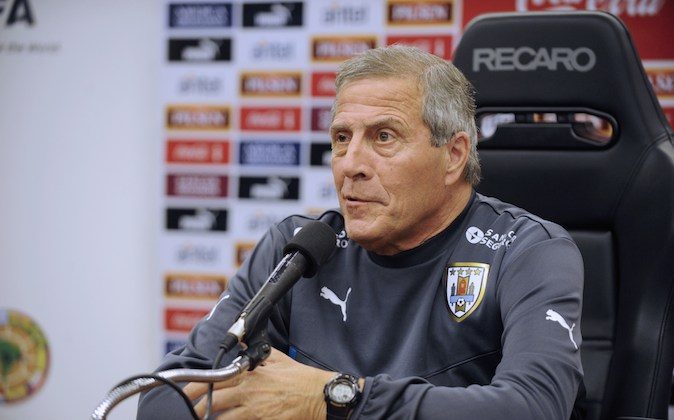 The coach of the Uruguayan national football team, Oscar Washington Tabarez, offers a press conference at the squad's training complex Complejo Celeste, in the department of Canelones near Montevideo, on May 26, 2014 ahead of the FIFA World Cup Brazil 2014 tournament. (MIGUEL ROJO/AFP/Getty Images)
Soccer

The Uruguay vs Northern Ireland soccer international friendly match is set for Friday, May 30.

The game will be broadcast on Fox Sports Cono Sur in Uruguay.

The game will stream on BBC Red Button in the United Kingdom.

Here is an article on Luis Suarez’s injury.

MONTEVIDEO, Uruguay (AP) — Uruguay star striker Luiz Suarez is recovering well from knee surgery, and the national team doctor refuses to rule him out for the World Cup.

Suarez, one of the world’s best players, is believed to have been injured in Liverpool’s last league game of the season. He had surgery last Thursday.

While team doctor Alberto Pan says Suarez is “not feeling any pain,” he cannot give assurances that Suarez will be fit to play. Pan adds it is “premature” to say when he can return to training.

Fellow Uruguayan striker Edinson Cavani told El Pais: “We’re all a bit discouraged by what happened. Injuries are always ugly and more so at this time.

“I think we have to leave him alone now so he can have a good recovery with no anxiety on him. We wish he can join us as soon as possible.”

The tournament in Brazil begins June 12. Uruguay plays its World Cup opener against Costa Rica on June 14, then faces England on June 19 and Italy on June 24.

Suarez scored and Premier League-leading 31 goals for Liverpool and was voted player of the year in England by the players’ association.