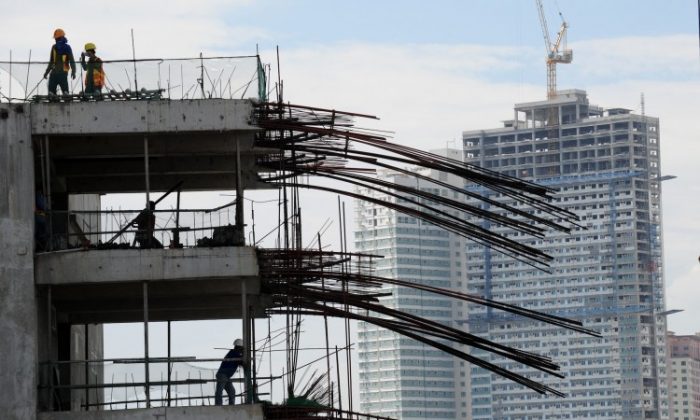 Workers are seen at a construction site in Manila, Philippines on Aug. 30. (Noel Celis/AFP/GettyImages)
World

WASHINGTON—Asian cities are growing at an unprecedented rate as millions of people migrate to urban areas. This pattern could go on for some time because most of Asia is not urbanized. Accompanying the phenomenal growth is more urban crime, expansion of slums, growing inequality, and the most challenging, environmental degradation, according to a recent report of the Asian Development Bank (ADB).

From 1980 to 2010, Asia’s urban population increased by 1 billion. Nearly half of all city dwellers on earth reside in Asia. The region will add another billion to its cities by 2040, particularly because of urban growth in mainland China, India, Pakistan, Indonesia, and Bangladesh.

China, for example, passed the 50 percent mark in just over 60 years, starting from 1950 when only 11 percent of the population resided in cities.

Even with this rapid expansion, the region is still playing catch up. In 2010, the level of urbanization of Asia and the Pacific was 43 percent compared to the global average of 52 percent. The ADB predicts Asia will continue to grow its cities faster than any other region.

Another unique feature of Asian urbanization is high population density. Seventeen of the world’s top 25 cities ranked by density are in Asia and the Pacific. The top three on the list are Mumbai and Kolkata (Calcutta) in India, and Karachi, Pakistan.

Asia also has the most megacities—cities with 10 million inhabitants or more. Of the globe’s 23 megacities, 12 are in Asia: Beijing, Dhaka, Delhi, Guangzhou, Karachi, Kolkata, Manila, Mumbai, Osaka-Kobe, Shanghai, Shenzhen, and Tokyo.

This dazzling pace of expansion comes at a price for the environment, according to the ADB.

Two-thirds (67 percent) of Asian cities fail to meet the European Union air quality standard for particulate matter compared to 11 percent of non-Asian cities. Today more than half of the world’s most polluted cities are in Asia.

The growth of per capita CO2 emissions in between Asia 2000 and 2008 was 97 percent, more than five times the 18 percent growth in outside of Asia.

If this scenario is allowed to continue unchecked, CO2 emissions will reach 10.2 tons per capita by 2050, three times the 2008 level, which would have disastrous consequences for Asia and the world, said Guanghua Wan, principal economist of ADB and a key contributor to the bank’s annual report, “Key Indicators for Asia and the Pacific 2012” released a few weeks ago. Wan spoke at discussion panel on Asian Urbanization at the Urban Institute in Washington on Aug. 30.

This projection is based on the Environmental Kuznets Curve (EKC) for the region of Asia, which represents the relationship between CO2 emissions and gross domestic product.

The number of people vulnerable to flooding will also increase with greater urbanization. In 2000, ADB estimated 251 million urban dwellers were at risk of flooding compared to 40 million in Europe, the region next largest at risk. A projected 410 million urban Asians are at risk of coastal flooding by 2025.

At the panel discussion, Dr. Sandra Rosenbloom, Urban Institute’s Innovation in Infrastructure program leader, said that flooding typically impacts the poor much more in terms of having to vacate one’s home and having a place to live when one returns. This differential impact is what happened in the United States as well, when Katrina occurred, she noted.

Yet Asia’s urbanization is not all negative and can be a positive development for the environment. “We see the benefits of urbanization,” said Wan.

With urbanization comes the development of the service sector, which generally pollutes less than manufacturing. Manufacturers tend to relocate away from city centers to industrial zones, where the land is cheaper.

Asia as a latecomer can benefit from the R&D and technology developed already in the West, said Wan. The report pointed out hopeful signs that the EKCs that model urbanization and particulate matter and CO2 are peaking sooner and declining more steeply in the last decade compared to the 1990s.

Other panelists were more cautious in their optimism. Nancy Convard, an environmental engineer who was at ADB for seven years, raised many questions on implementing the urban planning touted in the report.

For example, when an urban middle class develops and is seeking improved housing, she said the challenge is doing it in a way so that housing remains affordable and doesn’t end up with luxury condominiums and slums.

Rosenbloom stressed that equity needs to be considered when building infrastructure.

For example, she said that when the World Bank and some developmental agencies fund a mass transit system, they are often told that it “kills the other modes of travel.” This typically hurts women. Oftentimes poorer women can’t take advantage of the new transportation system so their travel options are curtailed. Even looking at Washington, D.C., she noted that when the city put in its rail system, it ended a lot of bus services.