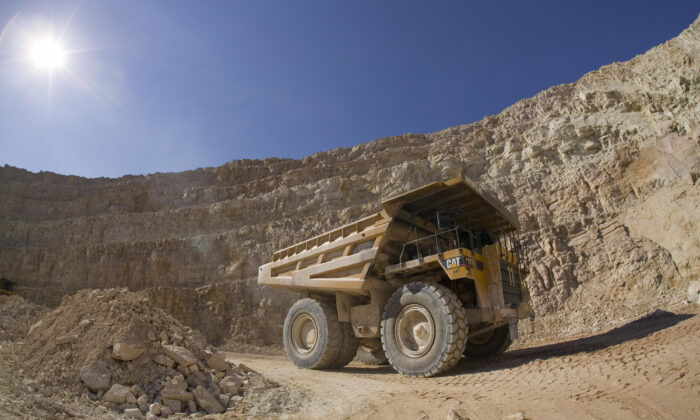 A 100-tonne Caterpillar truck descends to the bottom of the Sue E open-pit uranium mine at Areva Resources Canada's McClean Lake site in McClean Lake, Saskatchewan, in this file photo. (David Boily/AFP via Getty Images)
Canada

Uranium Prices Surge on Financial Interest After Years in the Doldrums

Uranium is in the Canadian spotlight once again thanks to significant financial investor interest in the mineral. Uranium market participants say the nascent phenomenon has its benefits, but speculation abounds as to how the price surge will affect the utilities amid an excess of demand over supply.

Uranium prices have been extremely volatile in September—rising to above US$50 a pound by mid-month—up about 40 percent, which is more than all other major commodities, according to Bloomberg. Prices fell to around US$45 in late September, which is still up more than 30 percent in the month.

This is coming on the heels of very stable prices over the last five years, after a gradual decline over the five years prior. Prices peaked at US$136 a pound in 2007.

As of Sept. 28, the Sprott Physical Uranium Trust, a Canada-based exchange-traded fund, is up about 35 percent since its July 19 inception. It has amassed a uranium stockpile roughly 16 percent of the annual consumption of the world’s reactors, Bloomberg reported.

The fund gives investors a way to directly invest in uranium without having to take physical possession of the mineral, similar to gold funds.

He views Sprott’s buying of the mineral as unequivocally beneficial to the uranium market, noting that it’s being done “in the most transparent and verifiable way” he’s ever seen, with the prices paid being available to the public.

Isaac said he’s happy that Sprott has taken over from Cameco as the biggest uranium buyer.

Uranium, in fact, does not trade on the open market like other commodities do. Rather, buyers and sellers negotiate longer-term contracts for the mineral privately. Thus it’s been said that the uranium market lacks price transparency.

“One of the things that a lot of investors are expecting from the trust is it playing a greater role in that price discovery process,” said John Ciampaglia, CEO of Sprott Asset Management, during a Sept. 14 webcast. “And that’s exactly what the trust has done so far.”

The utilities that need the mineral to power nuclear reactors are reportedly not actively buying or selling the product despite all the noise in the uranium markets. Economist Peter St. Onge says they’re not known for their financial acumen and could be “deer in the headlights.”

“This hasn’t happened [for] a long time—uranium has been asleep for at least five years,” he told The Epoch Times. “One of the concerns is that these guys [the utilities] get caught flat-footed,” he added.

However, Per Jander, technical adviser to the Sprott uranium fund, said during the webcast that “I’m not worried that any utility is going to run out of material to run the reactors.” He said the utilities are probably watching and waiting to see if the rise in prices is sustainable, as they have some inventory.

The Epoch Times contacted Ontario Power Generation for comment but did not get a response.

St. Onge, a research fellow with The Heritage Foundation and a former senior fellow at the Montreal Economic Institute, added that the price of uranium has plenty of room to run before the situation gets problematic, potentially prompting the government to get involved.

Isaac said the lack of a response from uranium fuel buyers shouldn’t be surprising given that the uranium price moves have been very sudden, as it takes time to adjust to new facts.

Isaac also explained that one problem with the uranium market has been uncommitted production, which means the mineral could end up being sold below production costs, thus affecting the market pricing mechanism.

“I don’t think the full appreciation of that [Sprott fund] vehicle is imputed in the market at the moment,” Isaac said.

A Glowing Future for Uranium?

As countries aim to move away from fossil fuels in favour of renewable energy, the role of nuclear energy garners consideration. Renewable energy like wind and solar has its shortcomings depending on the weather or time of day, and it can even create its own set of environmental problems.

In addition, an energy crisis is plaguing Europe. The U.S. benchmark West Texas Intermediate oil price has risen again and is hovering just below US$75 a barrel. And natural gas is well over US$5 a barrel, having reached its highest level since 2014.

Nuclear energy is dogged by a handful of disasters like Fukushima, Chernobyl, and Three Mile Island, but its proponents suggest that it is the safest and lowest-cost form of energy available.

However, nuclear energy remains politically unpopular, says St. Onge, adding that some hard choices need to be made as decarbonizing the entire economy does not come without some pain. Building more nuclear plants, which could address the energy gap, would take time, he said.

“We can play games all day about solar panels and wind. It ain’t there yet. Maybe it’ll be in 20 years. The only way to do that feasibly in the near term is nuclear, and everybody hates nuclear. Nobody wants to endorse nuclear,” St. Onge said.

According to Ontario Power Generation, about 60 percent of Ontario’s power is provided by nuclear energy.

Uranium is expected to be in demand over the long term. Natural Resources Canada lists it as a critical mineral along with rare earth elements and with minerals like lithium, graphite, cobalt, and nickel, which are required for making electric vehicles, batteries, and electronic components.

Canada is the second-largest uranium producer in the world, at 13 percent—though it’s a distant second behind Kazakhstan, which produced 42 percent of the world’s supply in 2019.