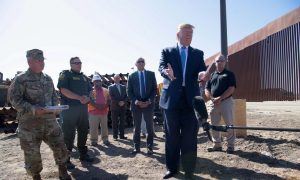 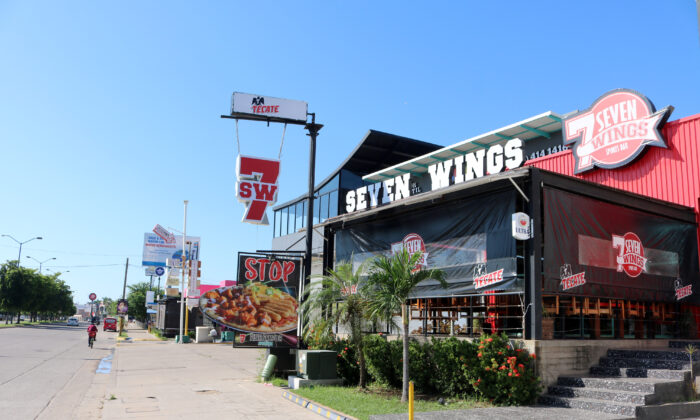 A general view shows restaurants at the Tres Rios neighborhood, which faced the most intense firefights on the street where soldiers attempted to arrest Ovidio Guzman, a son of jailed drug lord Joaquin "El Chapo" Guzman, in Culiacan, Mexico Oct. 20, 2019. (Stringer/Reuters)
Americas

CULIACAN, Mexico—The trendy bars and restaurants along the main strip of a Mexican city that was overwhelmed late last week by an army of cartel gunmen slowly began their recovery over the weekend, even as many traumatized residents have shied away.

Culiacan’s central Tres Rios neighborhood, with its gated communities, upscale shopping centers, and exclusive golf course, was the site of some of the most intense firefights on Oct. 17, concentrated on the street where soldiers attempted to arrest Ovidio Guzman, a son of jailed drug lord Joaquin “El Chapo” Guzman.

While El Chapo’s Sinaloa Cartel successfully pinched off access at various points in the city, they trained their focus on Tres Rios, where Ovidio Guzman was briefly found and detained, but later released after officials realized they were outmatched.

Mexico’s foreign minister admitted on Oct. 19 that the government feared upward of 200 civilian casualties if the operation to extract the young narco had continued.

Just off the entrance of a Tres Rios seafood restaurant that found itself at the heart of the hours-long siege, workers scrubbed away dried blood from the steps.

They said the spot marked the final resting place of a cartel gunman, following what officials described as 14 separate, armed attacks launched by the Sinaloa Cartel’s convoys of pickup trucks against Mexico’s overwhelmed military at different points in the city.

“It’s going to be a struggle to open back up, but we have to do it,” said the restaurant’s owner, declining to provide his name, but ticking off his immediate priorities: “sweeping up the debris, cleaning up everything, and calling for help to repair the damages.”

As workers assessed the few windows that had not been pierced by the flurry of bullets, the owner acknowledged it will take time to lure customers back.

“Right now, everyone here is in a state of panic, but Tres Rios will still be the best part of Culiacan,” he said.

Meanwhile, workers at the car wash next door to the restaurant focused on repairing metal vacuum cleaners ripped open by bullets.

Upon finding out that authorities sought to capture Ovidio Guzman and extradite him to the United States, the cartel’s heavily armed gunmen strategically erected 19 blockades during a roughly four-hour stretch in the afternoon, preventing additional military and police from responding as terrorized locals scurried for cover.

One of the most intense firefights took place on the block behind the restaurant, where local residents said several military vehicles had stopped along a non-descript building with tall, white walls, in a bid to extract El Chapo’s son from a residence inside.

Now the walls stood covered with hundreds of bullet holes, as if the building had broken out in a rash.

The soldiers in the vehicles came under heavy fire from a hill across an adjacent drainage canal, separating Tres Rios from the Tierra Blanca residential neighborhood, and several homes there were caught in the crossfire.

“They destroyed my bedroom windows. The walls, they’re filled with bullet holes,” said taxi driver Jose Manuel Uriarte, whose home is located just below the hill where he said gunmen had taken up positions to fire upon the military vehicles.

He pointed out, with fingers stained with paint from the repairs he had started, where his mattress had been covered by a blanket of broken glass.

An avocado tree in the lush garden outside his bedroom had been split open by the gunfire and Uriarte estimated that he had already found around 500 bullet casings nearby.

He spotted another on the ground, squatted down to pick it up and then handed it over like it was a souvenir.

Like other locals, he wonders about the possible infiltration of the cartel into local and state police, but said there is no doubt that the cartel proved itself to be the stronger force, at least for one violent afternoon last week.

And then his face turned angry and he pursed his lips.

“It’s infuriating,” he said, “because you have to ask yourself, ‘Who’s really in charge?'”