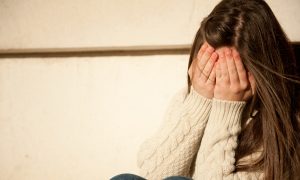 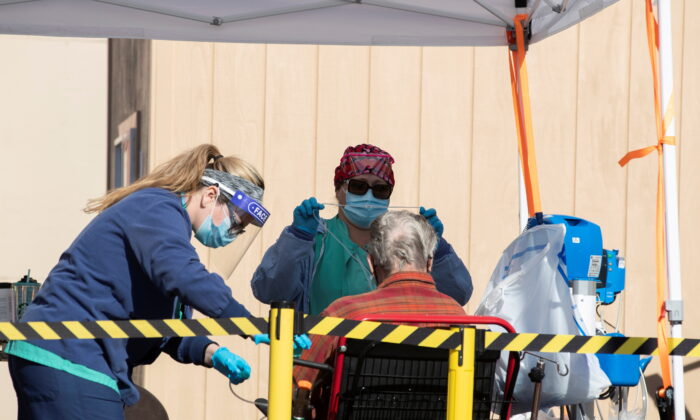 Health care workers attending to a patient as St. Mary Medical Center resort to using triage tents outside to handle the overflow at its 200 bed hospital during the outbreak of the CCP virus in Apple Valley, Calif., on Jan. 12, 2021. (Mike Blake/Reuters)
WORLD

Updates on CCP Virus: UK to Move Alert Level Down as Hospitalisations Fall

Health officials in Britain say the country’s CCP virus alert level should move down from the highest level because hospitalizations have decreased.

The UK’s four chief medical officers say although health services remain under significant pressure, the national alert level can move from five to four because the numbers of patients in hospitals are “consistently declining.”

An Oxford University biology laboratory researching the CCP (Chinese Communist Party) virus has been hacked by a cyber gang amid fears they are trying to sell secrets to the highest bidder, The Telegraph reported on Thursday.

The hack occurred at the Division of Structural Biology, known as Strubi, which has been carrying out research into COVID-19, according to the newspaper. Oxford University confirmed to the newspaper that Strubi had been subject to a hack.

‘Overdoing It’ With Masking Is Better than Not Doing Enough: NIH Director

Dr. Francis Collins, director of the National Institutes of Health (NIH), said Wednesday that given the relative lack of certainty about the protection provided by COVID-19 vaccines, it is better to go overboard on masking up than not do enough to help curb the spread of the CCP virus, which causes the disease COVID-19.

Collins made the remarks in an interview on Fox Business Network’s “Cavuto: Coast to Coast,” in which he said getting a vaccine may provide people with a false sense of security. He said that, even after people have been vaccinated, “we don’t know exactly whether it’s still possible for that person to carry the virus. It might be, and until we have better data, then masks are still important.”

Los Angeles County on Wednesday reported another 806 deaths from the CCP virus during the winter surge, pushing California’s toll above 50,000, or about one-tenth of the U.S. total from the pandemic.

The county, which has a quarter of the state’s 40 million residents, said the deaths mainly occurred between Dec. 3 and Feb. 3. The Department of Public Health identified them after going through death records that were backlogged by the sheer volume of the surge’s toll.

Indonesian Nurse Dies After Being Given Chinese-Made Vaccine

A nurse has died eight days after being vaccinated with the Chinese-made CoronaVac vaccine in East Java on Feb. 14, Indonesian media reported.

Erny Kusuma Sukma Dewi, 33, tested positive for the CCP virus, commonly known as novel coronavirus, and was treated in a hospital, but then died. All her colleagues and friends tested negative for the virus, while her husband tested positive without symptoms, according to her employer Endah Woro Utami, president of Ngudi Waluyo Regional General Hospital in Blitar Regency.

Algeria’s national public television network says the country has received a batch of about 200,000 COVID-19 vaccines donated by China.

Images broadcast on TV showed a military jet carrying the Sinopharm vaccines had landed on Wednesday evening in the presence of Algerian Minister of Communication Ammar Belhimer and Chinese Ambassador Li Lianhe.

Amsterdam is restricting access to a large park after thousands of people gathered there Wednesday, many of them allegedly flouting social distancing rules.

With warm spring weather in the Netherlands expected to continue through much of Thursday, the side entrances to Amsterdam’s Vondelpark will be closed and City Hall says it is closely monitoring the main gates.

Pfizer announced Thursday that it has begun studying a third dose of its COVID-19 vaccine, part of a strategy to guard against mutated versions of the CCP virus, which causes the disease COVID-19.

Health authorities say first-generation COVID-19 vaccines still protect against variants that are emerging in different parts of the world. But manufacturers are starting to prepare now in case a more vaccine-resistant mutation comes along.

European Union leaders will agree on Thursday to work on certificates of vaccination for EU citizens who have had the anti-COVID-19 shot, with southern EU countries that depend heavily on tourism desperate to rescue this summer’s holiday season.

Lockdowns to slow the pandemic caused the deepest ever economic recession in the 27-nation bloc last year, hitting the south of the EU, where economies are often much more dependent on visitors, disproportionately hard.

Nicole Hao, Tom Ozimek, Reuters, and The Associated Press contributed to this report.