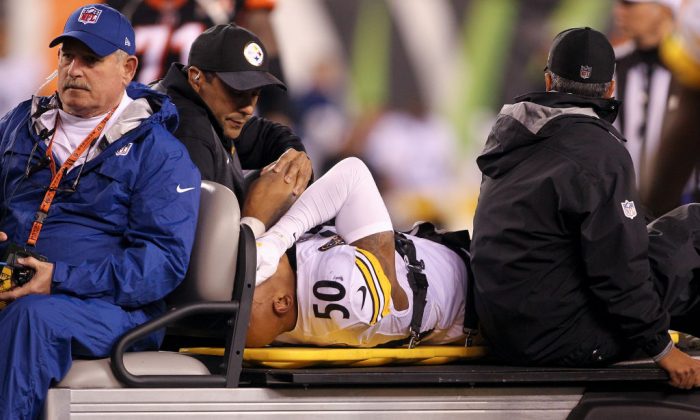 Ryan Shazier #50 of the Pittsburgh Steelers reacts as he is carted off the field after a injury against the Cincinnati Bengals during the first half at Paul Brown Stadium in Cincinnati, Ohio, on Dec. 4, 2017. (John Grieshop/Getty Images)
Entertainment News

After Ryan Shazier, the Pittsburgh Steelers linebacker, went down with an injury during Monday night’s game, doctors have an update.

Shazier, 25, underwent spinal stabilization surgery on Wednesday, Dec. 6, after he was transferred to the University of Cincinnati medical center, ESPN reported.

#Nextgenathl ? I love football, I hate the dangers that come with it.I'm a firm believer in you should NEVER lower your head when making a hit! To the young ones, Please heed that warning! Prayers up to the Shazier Family.?? @RyanShazier pic.twitter.com/lv6sHSIUrI

The surgery is performed when the bones around a person’s spinal cord are dislocated.

Dr. Anthony Alessi told the network: “It’s not good. … We’re not going to see him [on the field] this season.”

“He may not play football again. This is a much more severe situation on our hands than we thought,” Alessi added.

Shazier hit Cincinnati Bengals receiver Josh Malone head-first and collapsed on the turf before grabbing his back area early in the first quarter.

Stop what you’re doing and pray for Shazier and his family ? That’s just awful ? pic.twitter.com/t32Jd4KCsE

Steelers teammates kneeled around Shazier as he was strapped to a stretcher and taken off the field. The team announced that Shazier had been taken to the hospital for further evaluation.

Some have asked for prayers for Shazier.

Ryan Shazier regained full feeling in his lower half. Retweet ??

“Please EVERYONE continue to pray for the Lords healing of Ryan,” Shazier’s fiancée, Michelle Rodriguez, wrote on Instagram. “God bless everyone for the continued support and love for our family at this time. We thank you so much!”

Shazier, 25, was the team’s leading tackler through 11 games.

My thoughts on the back injury sustained by Steelers linebacker Ryan Shazier: pic.twitter.com/YJIon60dRv