Update on Pennsylvania Woman Who Came Into Contact With Escaped Monkeys 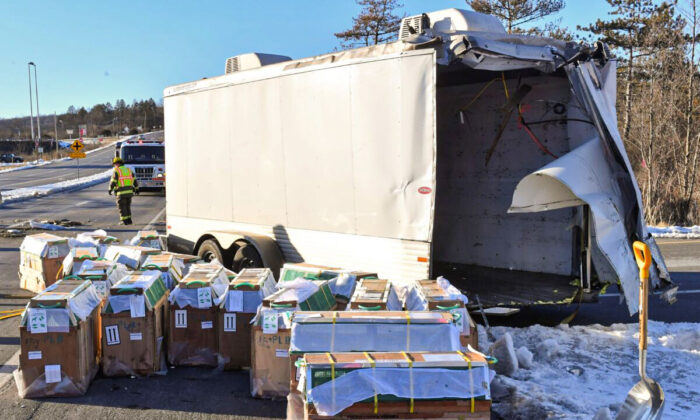 Crates holding live monkeys are collected next to the trailer they were being transported in along state Route 54 at the intersection with Interstate 80 near Danville, Pa., on Jan. 21, 2022. (Jimmy May/Bloomsburg Press Enterprise via AP)
By Jack Phillips

A woman who said she came into contact with escaped monkeys in Pennsylvania several days ago said that she’s not sick.

“I want people to know I am not sick, I found out I was at a birthday party Friday night and people there had COVID-19,” Michelle Fallon told local news outlet the Daily Item. “I was exposed to the monkeys and exposed to people with COVID. It was the worst day of my life.”

Fallon, meanwhile, said she was only taking precautions from the Centers for Disease Control and Prevention (CDC) and state health officials.

“I explained what happened and they said I was at very low risk of anything but I went to get checked out anyway because I started to not feel well,” Fallon told the newspaper. “I want people to know I am not sick regardless of what they are reading that has been put out there in the media,” she continued. “I only spoke to a few media outlets but I have been talking to PETA.”

Pennsylvania State Police said on Jan. 21 that a trailer collided with a dump truck causing crates of monkeys to be dumped near Route 54 and Interstate 80 in Danville, Pennsylvania. Three of the animals escaped but were eventually captured and euthanized, officials said.

“I was behind the truck that was in the accident and I saw when the truck veered off the road and saw the incident,” she said.

When approaching the crates that fell from the truck, Fallon recalled, “So I was like ‘well let me make sure these cats are OK’ so I approached a crate and saw the fur and heard a grunting sound. … I was confused about what kind of cats they were until I picked up the green cloth.”

“When I picked up the cloth a monkey popped up and hissed at me,” she added. “I said, ‘oh, my God it’s a monkey’ and I backed away and the driver told me to not go near them because they were not quarantined and he had to get back to Missouri.”

The monkey escape incident is being investigated by the U.S Department of Agriculture, or USDA, following a complaint that was filed by the activist group the People for the Ethical Treatment of Animals (PETA).