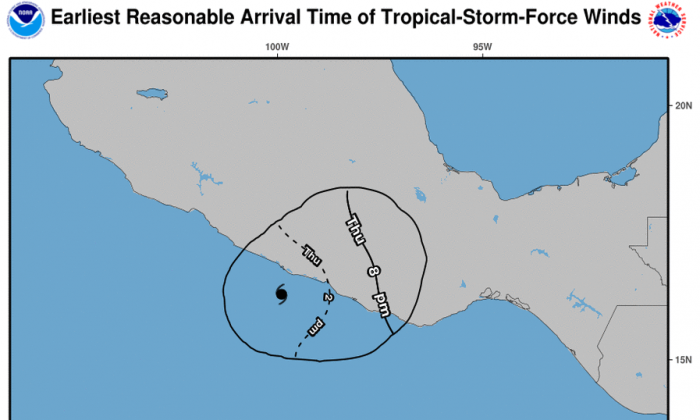 Hurricane Max is continuing to strengthen as it nears the southwestern Mexican coast, according to the U.S. National Hurricane Center in a 2 p.m. ET update.

Max, a Category 1 storm with 85 mph winds, is “strengthening as it approaches the coast of Mexico east of Acapulco,” the NHC stated.

“Max is moving toward the east near 8 mph (13 km/h). An eastward or east-northeastward motion at a similar forward speed is expected through Friday,” the agency, based in Miami, added in the update. “On the forecast track, the center of Max is forecast to cross the coast of southern Mexico in the hurricane warning area later today or this evening.”

“Max will bring the biggest threat for flooding across the state of Guerrero, including Acapulco, into Friday morning,” said AccuWeather Meteorologist Steve D. Travis.

As Reuters noted, Max is bearing down on a region popular with tourists that includes resorts like Acapulco, Zihuatanejo, and Ixtapa.

Max will likely strengthen before reaching the coast, but is predicted to weaken once it hits land, where it will dissipate, the NHC said. Category 1 is the lowest level on the five-tier Saffir-Simpson scale that measures hurricane wind speeds.

In the state of Guerrero, home to some of Mexico’s major tourist resorts, Max could dump as much as 10 inches (25 cm) of rain, the NHC said.

The storm is bad news for Acapulco as the city prepares to host tourists who travel to the city to celebrate Mexico’s Independence Day celebrations this weekend.

Meanwhile, tropical storm Norma formed in the Pacific on Thursday, according to the NHC. The storm, which is currently 395 miles south of Cabo San Lucas, on the southern tip of Mexico’s touristy Baja California peninsula, could become a hurricane by late Friday.