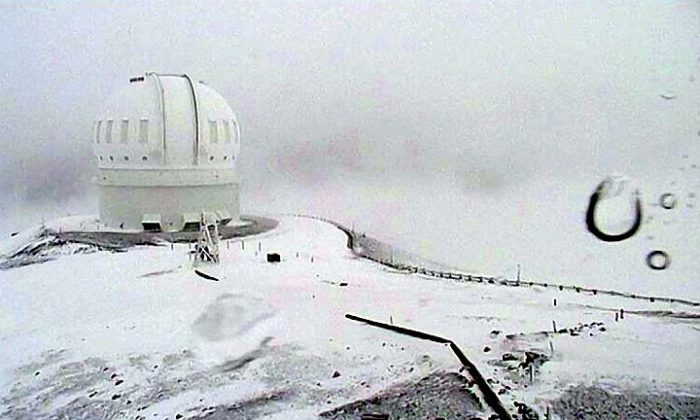 In this image made from webcam video provided by Canada-France-Hawaii Telescope, the CFHT telescope on the summit of Mauna Kea on Hawaii's Big Island is covered in snow on Thursday, Dec. 1, 2016. The National Weather Service in Honolulu has issued a winter storm warning for the summits of Hawaii's Big Island as wind and snow engulf the high peaks. (Canada-France-Hawaii Telescope via AP)
US

Up to a Foot More Snow Expected for Hawaii Mountaintops

More snow is expected to fall on Hawaii mountaintops as a winter storm warning goes into effect through Monday morning.

Hawaii News Now reports (http://bit.ly/2g1jFPj) up to a foot more of snow could fall. A previous warning was lifted Saturday for a storm system that also brought frozen precipitation to higher elevations and heavy rain elsewhere.

The summits of Mauna Loa and Mauna Kea on Hawaii’s Big Island are closed amid icy, windy, hazardous conditions.

The National Park Service says people can see the deepening layer of snow at 10,000 feet.

Hawaii also is under a flash flood watch into Sunday afternoon