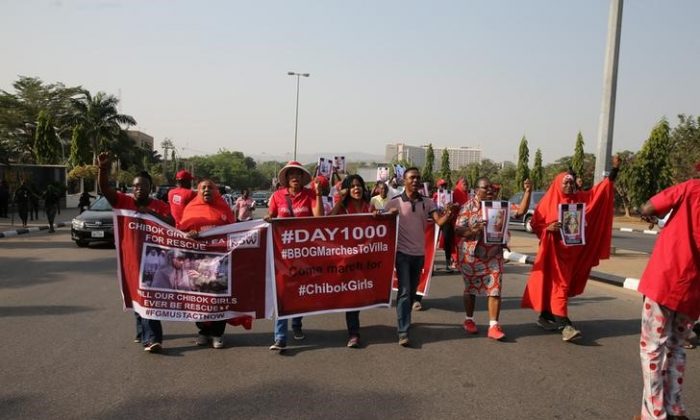 Members of the #BringBackOurGirls campaign rally in Nigeria's capital Abuja to mark 1,000 days since over 200 schoolgirls were kidnapped from their secondary school in Chibok by Islamist sect Boko Haram, Nigeria on Jan. 8, 2017. (REUTERS/Afolabi Sotunde)
International

Up to 50 More Chibok Girls Released From Boko Haram

ABUJA, Nigeria—Up to 50 Chibok schoolgirls were released by radical Islamic Boko Haram terrorists on Saturday after more than three years in captivity, a Nigerian government spokesman said, the largest group yet to be freed after years of tense negotiations.

The girls were among about 220 students abducted from a secondary school in the northeastern town of Chibok in 2014, sparking a global campaign #bringbackourgirls supported by then U.S. First Lady Michelle Obama and list of celebrities.

About 21 Chibok were released in October in a deal brokered by Switzerland and the International Red Cross, while a handful of others have escaped or been rescued. But about 195 were still missing.

“The government will soon release an official statement,” a government spokesman told the Thomson Reuters Foundation.

Last month President Muhammadu Buhari said in a statement that the government was “in constant touch through negotiations, through local intelligence to secure the release of the remaining girls and other abducted persons unharmed.”

The girls were taken from a school in Chibok in the remote northeastern Borno state where Boko Haram has waged an insurgency aimed at creating an Islamic state that has killed thousands and displaced more than 2 million people.