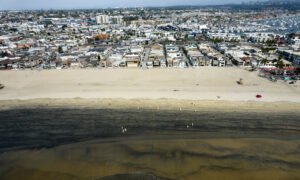 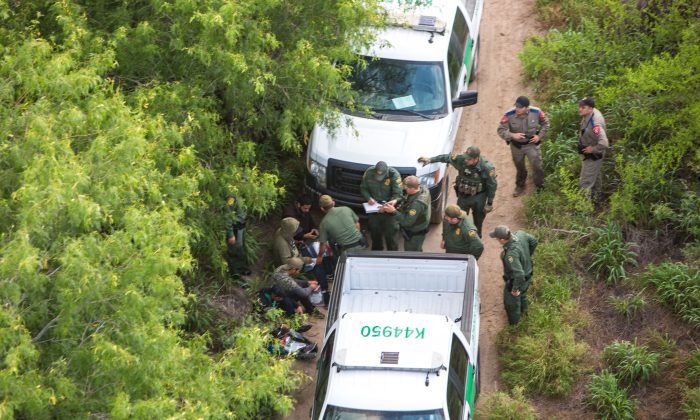 A view from a Border Patrol helicopter, shows the Texas Border Patrol and Texas State Troopers detaining illegal aliens from Mexico near McAllen, Texas, on May 30, 2017. (Benjamin Chasteen/The Epoch Times)
US News

Up to 29 Million Illegal Aliens in United States: Yale Study

Up to 29 million illegal immigrants are currently living in the United States, according to researchers affiliated with Yale University, with a mean estimate of 22.1 million out of the range delivered by a mathematical model.

That’s more than twice the number of previous estimates or 11.3 million illegal aliens.

The researchers said they used mathematical modeling on a range of demographic and immigration operations data. The lowest estimate based on their modeling is 16.7 million illegal aliens.

The results were published in “PLOS ONE.”

“Our original idea was just to do a sanity check on the existing number,” Edward Kaplan, the William N. and Marie A. Beach professor of Operations Research at the Yale School of Management, said in a Yale press release. “Instead of a number which was smaller, we got a number that was 50 percent higher. That caused us to scratch our heads.”

Jonathan Feinstein, the John G. Searle professor of Economics and Management at Yale School of Management, said that the figure everybody was quoting for a while appears that it might wrong.

“There’s a number that everybody quotes, but when you actually dig down and say, ‘What is it based on?’ You find it’s based on one very specific survey and possibly an approach that has some difficulties. So we went in and just took a very different approach,” he said.

The 11.3 million illegal immigrant estimate was based on extrapolation of the Census Bureau’s annual American Community Survey.

The new approach the researchers used was based on operational data, including deportations and visa overstays. They combined that with demographic data, including death rates and immigration rates. The paper examined data from 1990 to 2016.

“We combined these data using a demographic model that follows a very simple logic,” Kaplan said. “The population today is equal to the initial population plus everyone who came in minus everyone who went out. It’s that simple.”

Because there is significant uncertainty surrounding some of the figures, researchers produced a range of results using the model. The researchers’ 95 percent probability range is 16 million to 29 million, with 22.1 million as the mean.

The researchers noted that they examined the past, and are just presenting a new range of figures that can give new insight into the issues surrounding illegal immigration. They said they hope their research spurs further research into the area.