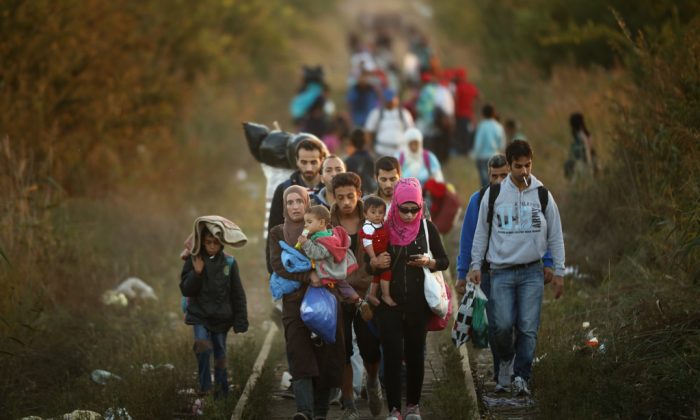 Migrants make their way through Serbia, near the town of Subotica, towards a break in the steel and razor fence erected on the border by the Hungarian government on Sept. 9, 2015. (Christopher Furlong/Getty Images)
Opinion

NEW YORK—Governments appear overwhelmed by the mounting challenges of unwanted migration. Only so many options are available, and none are acceptable to all voters. But as the British government recently discovered, surging migration has become an issue of political survival.

During the first half of 2016, almost a quarter million refugees and migrants entered Europe—more than twice as many as during the same period in 2015. Estimates indicate that criminal networks that facilitated illegal entries into Europe, may have earned up to $6 billion in 2015. More than 10,000 people have died at sea trying to reach Europe by crossing the Mediterranean since 2013. After several masqueraded as refugees to enter Europe and committed terrorist acts in Brussels and Paris, governments took action to stem the uncontrolled migration flows.

The Critical Link Between Poverty and Health

In recent years the number of unauthorized migrants in the United States from Asia and Africa has climbed drastically. For example, an estimated 28,000 migrants from India were residing unlawfully in the country in 1990, and the number is now more than 280,000. Since late 2014, U.S. Customs and Border Protection has processed for residency some 75,000 unauthorized Cuban migrants arriving at U.S. ports of entry.

In contrast, during the same period, more than 132,000 families and unaccompanied children, mostly from Central America, have been apprehended at the border, with almost all released and ordered to appear in immigration court for judicial review and possible repatriation.

Globally, the total number of migrants is approximately 250 million, or about 3 percent of the world’s population of 7.4 billion people. Of these migrants some 20 million are refugees. Two-thirds of the refugees are Afghans, Palestinians, Somalis, and Syrians. Developing countries host close to nine in ten refugees, with the largest numbers in Turkey, Pakistan, Lebanon, Iran, Ethiopia, and Jordan.

In addition, an estimated one fifth of the world’s migrants, or 50 million people, are residing in countries illegally after having entered unlawfully or having overstayed short-term visas. Countries with the largest numbers of unauthorized migrants, though statistics can be unreliable, include the United States, South Africa, and the United Kingdom—representing 3 percent, 19 percent, and 2 percent of each population, respectively.

Major responses to challenges of unwanted migration include:

Information Campaigns: To dissuade people from attempting illegal migration, both sending and receiving countries have implemented broad media programs warning potential migrants of the likelihood of apprehension, detention, and subsequent deportation. The United States, for example, is promoting awareness campaigns in El Salvador, Guatemala, Honduras, and Mexico. EU countries have also funded various projects in Europe, Africa, and Asia, running advertisements to warn of the dangers of illegal migration. So far, the campaigns are falling far short of their intended goals, as the perceived benefits of migration greatly outweigh the potential risks.

Financial Assistance: Some governments offer monetary and other incentives, as well as threaten to enforce negative consequences to encourage cooperation. The recent EU-Turkey migration agreement, criticized by some as a bribe, blackmail, and violation of human rights, faces legal challenges and may still unravel. The EU is also offering assistance to several other countries through various programs, such as the recently adopted Partnership Program with Third Countries. In exchange for commitments to secure borders, block illegal migration to the EU, and build temporary detention centers, the EU will provide supportive “country packages”—also questioned by human rights groups—to Eritrea, Ethiopia, Jordan, Lebanon, Libya, Niger, Nigeria, Senegal, and Sudan.

Support for Refugees and the Internally Displaced: Supporting refugees in countries neighboring the source country, while preventing internally displaced persons from becoming refugees, is among the major responses to unwanted migration. Conflicts in Afghanistan, Colombia, Democratic Republic of Congo, Iraq, Somalia, Sudan, Syria, and elsewhere have resulted in 20 million refugees, while conflict, violence, and natural disasters have displaced more than 40 million people within their own country. Many opt for treacherous trips across land and sea to wealthier and safer nations, especially the EU.

Border Security: Amid growing public concern and the rising influence of nativist right-wing political parties, governments are enhancing borders and intensifying migrant and tourist screenings. In addition to reinforcing borders with walls, fences, barriers, razor wire, guards, electronic surveillance, and air/naval patrols, governments are also battling smugglers and traffickers. During its first year of operation, the EU, for example, intercepted and destroyed more than 100 boats, arrested scores of smugglers, and rescued thousands of unauthorized migrants. Some contend that the EU’s anti-migrant strategy has turned into a massive rescue operation. Rather than disrupting smuggling networks, the naval operation has become a magnet for unauthorized migrants while assisting smugglers who alert EU rescue vessels of migrant ships in distress.

Relocation to Other Countries: Several governments block migrant entry, diverting them from their borders and relocating them to other countries. Australia, for instance, sends irregular migrants to Papua New Guinea and Christmas Island for review and processing. Papua New Guinea’s top court has recently ruled that such detentions are illegal.

Repatriation and Deportation: Despite official policies and judicial decisions to repatriate unauthorized migrants to their home countries, the actual return ratios are comparatively low and resistance to repatriation runs high. Return ratios of unauthorized African migrants from the EU range from about 10 percent for Niger and Mali to highs of 42 percent and 31 percent for Libya and Nigeria, respectively. On average, only one in four official return decisions resulted in an actual repatriation during the period 2014–2015.

International Summits: Much of the regional and international discussions up to now have avoided negotiations or concrete recommendations. High-level talks at the United Nations have skirted issues of illegal migration.

Governments have a wide range of possible responses to critical migration challenges, yet hesitate due to the complexity of the issue, limited resources, human rights concerns, and heated public sentiments and thus fail to cope with surges of unwanted migration. The recent Brexit vote has demonstrated the political cost of neglecting illegal immigration. Public anger at the surge of unauthorized migrants and asylum seekers and the government’s response played a role in the British vote to leave the European Union.

Given the rising concerns over refugees and unauthorized migrants worldwide, governments cannot afford to dodge the challenges and hope to somehow muddle through. As witnessed in virtually every region, ignoring unwanted migration and surges of refugees and asylum seekers has serious economic, social, political, and security consequences for countries and their governments as well as for the migrants themselves.