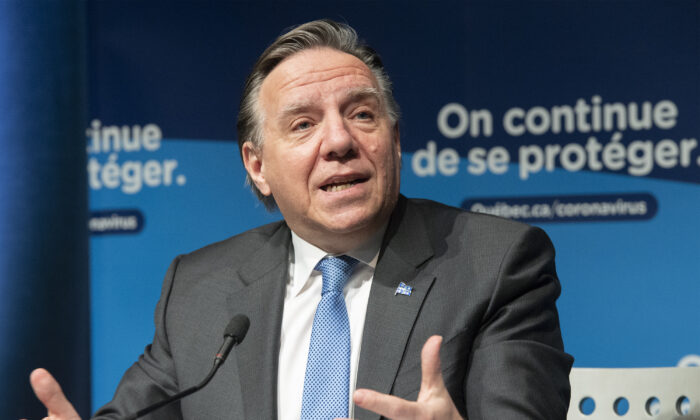 Quebec has announced that the unvaccinated will have to pay an extra “health contribution,” making it the first jurisdiction in Canada to impose a financial penalty on those who refuse the shot.

Premier François Legault made the announcement at a press conference on Tuesday, a day after receiving the resignation of Horacio Arruda, the province’s director of public health, who said he was stepping down because of an erosion of public confidence in health-protection measures.

When asked if the penalty would be in the range of $50 or $100, Legault said it would be more than that. The amount hasn’t been decided but it will be “significant,” he said.

The premier said he was in talks with the ministry of finance, as the penalty would likely have to be paid when Quebecers fill their taxes every year. People not covered by a private insurance plan need to pay a yearly health contribution, and the new tax would work similarly, he said. The tax will will not apply to those with a medical exemption.

“I think right now it’s a question of fairness for the 90 percent of the population who made some sacrifices,” Legault said. “I think we owe them this kind of measure.”

The announcement came a day after Prime Minister Justin Trudeau held a call with the premiers to discuss the pandemic response.

The readout of the call did not mention mandating vaccination, but after the call New Brunswick’s premier Blaine Higgs told CBC that “I think it’s something that will get further discussion in New Brunswick, and probably across the country.”

The topic of mandating vaccination for all Canadians was raised on Jan. 7 by federal Health Minister Jean-Yves Duclos. Health is a provincial field, but the federal government plays the role of procuring vaccines, providing test kits, and influencing provincial policy through financial incentives.

Quebec’s health-care system has been strained by the pandemic and the arrival of the Omicron variant, but the issue is a longstanding one. Past flu epidemics have led to overwhelmed hospitals in 2019, 2018, 2017, and 2016.

As of Jan. 11, 82 percent of Quebecers have been fully vaccinated, and close to 85 percent have received at least one dose of a COVID-19 vaccine.

Quebec, like many other jurisdictions such as Ontario and some U.S. states, has recently recognized that a sizeable number of cases counted as COVID-19 hospitalizations are not hospitalized because of the virus but rather test positive while being admitted for something else, such as giving birth. Arruda said that in Quebec, the number is at least 30 to 40 percent of patients.

The province also reported 62 new COVID-19 deaths on Jan. 10. Government data shows that 97.8 percent of COVID deaths in Quebec had a preexisting medical condition, with 93 percent having two or more.