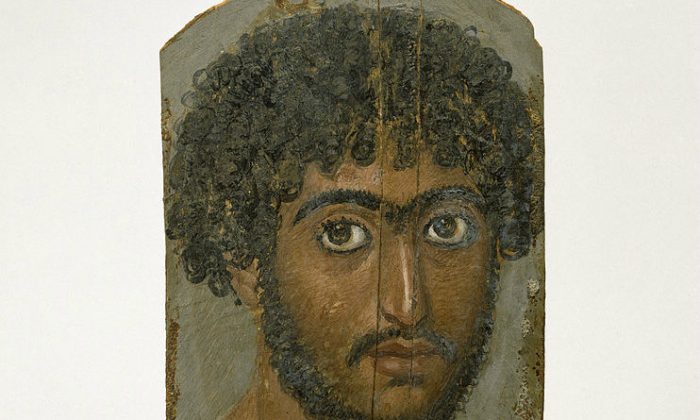 Unraveling the Mystery of the Bearded Man

“He looks almost Byzantine or Greek, gazing doe-eyed over the viewer’s left shoulder, his mouth forming a slight pout, like a star-struck lover or perhaps a fan of the races witnessing his favorite charioteer losing control of his horses,” writes Heritage Daily in a report about new research being undertaken to solve the mystery of the Bearded Man.

The Bearded Man is a “mummy portrait” of a Roman-Egyptian, dating back to 170-180 AD, which was found attached to his sarcophagus, although it has since become separated from his mummy and coffin and so his true identity has become lost to the pages of history.

Mummy portraits first appeared in Egypt during the Roman era in the first century AD, and remained popular for around two centuries. The mummy portraits were typically painted on a wooden board and then placed on the outside of the coffin, approximately in the position where the head would be. While Egyptians used idealized representations of the deceased, the Roman style was much more naturalistic and it is generally believed to be a fairly accurate depiction. Techniques employed by scientists have been used to compare the actual appearance of several mummies with their portraits. This indicated that the portrait did indeed show the person as they appeared during life, with some artistic license of course. In some cases, archaeologists believe they have identified members of a family by comparing physical similarities displayed in the portraits.

About 900 mummy portraits are known at present. The majority were found in the necropolis of Fayum. Due to the hot dry Egyptian climate, the paintings are frequently very well preserved, often retaining their brilliant colours seemingly not faded by time.

Advancements in nanotechnology and scientific method may now hold the potential to unravel the origin of the Bearded Man. Researchers have retrieved a microscopic sliver of painted wood, just 20 nanometres wide (a nanometer is a billionth of a meter), in order to identify the type of pigment that was used. It is hoped that this may enable them to trace the region where it came from.

“Understanding the pigment means better understanding of the provenance of the individual” Darryl Butt, associate director of the Center for Advanced Energy Studies (CAES), told Heritage Daily. “Where the pigment came from may connect it to a specific area and maybe even a family.”

Until now, researchers have been limited by the lack of samples large enough to analyse. But new nanotechnology methods mean that scientists are able to identify pigments using only microscopic fragments.

Initial analyses have revealed that the paint is a synthetic pigment, which appears to have been heated in a lead crucible. It was previously believed that this process was developed in the 1800s, but new testing now suggests it happened in ancient times. Research into the pigment and its origins are ongoing, and may finally reveal where the Bearded Man came from.