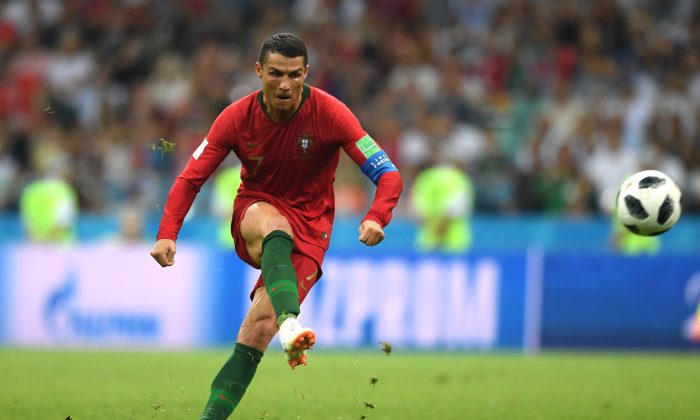 Cristiano Ronaldo scores a stunner of a free kick against Spain on June 15, 2018 in Sochi, Russia. (Stu Forster/Getty Images)
Soccer

Traditional powers off to uneven starts
By Rahul Vaidyanath

If the World Cup is to be a success, it depends on what happens on the pitch. In that respect, Russia 2018 is off to an excellent start.

What tends to make the tournament better? Exciting games, the high drama of late goals, few red cards, no scoreless draws (for some), and some beautiful free kick goals, among other things.

What tends to make a football match less enjoyable includes, for example, players diving, feigning injuries, and poor officiating. Fortunately, there has been very little of that.

The standard of officiating has been excellent when compared to the club game—and interestingly enough, there are no officials from the English Premier League. Sure, some will gripe about a decision or lack thereof, but on balance, Russia 2018 has managed to avoid highly controversial decisions such as offside goals or incorrectly awarded penalty kicks. Fingers crossed.

These officials now have VAR—the biggest novelty for Russia 2018. And how it has worked must be applauded. “Video assistant referee” has worked seamlessly to alert the referee to anything he missed. Case in point was France being awarded a penalty after the referee missed a foul.

The bottom line is making the right call without overly disrupting the flow of the match. Mission accomplished. Too many times, a football match is ruined by dubious officiating, and thankfully, that has not happened at Russia 2018.

While the first set of matches have shown greater parity among nations and thrown up some intriguing upsets, one constant has been the general success of the European nations. Through the first 16 games, Europe is the only one of the five regions with a winning record. European teams have won eight games, lost two, and drawn four.

But one of the European nations to lose its first game is Germany—the defending champion and the world’s top-ranked team. While its 1–0 loss to Mexico is the most shocking result of the tournament, a defending champion losing its opening match at the subsequent World Cup is not unusual. Germany became the sixth defending champion to suffer the ignominy.

Mexico took advantage of Germany on the counterattack repeatedly and should have scored more than once.

What’s bizarre about Germany’s loss is that its poor showings in friendlies against Saudi Arabia and Austria did not appear to spur any kind of concern. German head coach Joachim Löw remained confident his team will qualify for the next round.

Mexico’s win over Germany was the first for the CONCACAF region (North and Central America and the Caribbean) over Germany after six losses and one draw.

The highly anticipated Portugal–Spain Group B clash, as expected, turned out to be the match of the tournament so far. It actually exceeded expectations and will surely be remembered for years to come, especially between the two geographic neighbours.

Ending 3–3, it featured an iconic hat-trick performance from Cristiano Ronaldo that seemed to cement his place as the world’s greatest player ahead of Lionel Messi. The game saw Portugal take a 1–0 lead, then a 2–1 lead, and then Spain held a 3–2 lead.

Ronaldo’s game-tying free kick was one of those moments that makes one just stand up and applaud. His trademark free kick mannerisms and celebration are no doubt being copied on pitches all over the planet.

Russia 2018 is also better off for having Iceland participating after what the tiny nation of less than 335,000 did for Euro 2016. Just surviving European qualification to reach the World Cup is an accomplishment in itself—just ask Italy and Netherlands—but to earn a 1–1 draw with two-time winner Argentina was sensational. And it was no fluke.

In fact, 99.6 percent of the population watched the game on television in Iceland. The “Viking Clap” that wowed Euro 2016 was performed in Moscow and just drowned out anything else with its power and passion.

Iceland—one of two countries making their World Cup debuts, along with Panama—exemplifies what appears to be greater parity in world football.

Taking a snapshot of the World Cup now that all 32 teams have played—of the current top 10 ranked nations, only two have won their opening games.

The first set of games of the group stage wrapped up with a couple of upsets on June 19 as Japan stunned Colombia and Senegal beat the group’s top-seeded team, Poland.

Japan beating Colombia is particularly significant as it marked the first time in 18 attempts that an Asian team had beaten South American opposition at a World Cup. The game also featured the second-fastest red card in tournament history, but more importantly, it was the only one so far at Russia 2018.

The remainder of the tournament sets up delectably. The next couple of matches for Germany leave no margin for error. These are the highest stakes in sport and Russia 2018 has set up a truly fascinating conclusion to the group stage with just about every possibility on the table.

And the way the tournament is going, maybe on July 15, a ninth different World Cup champion will be crowned.