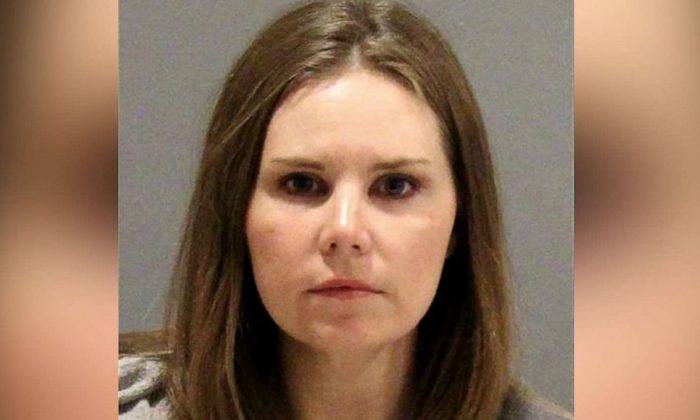 A Nebraska woman was arrested and charged with negligent child abuse resulting in death after unsuccessfully attempting to perform a home delivery at a young couple’s home in Omaha.

Hock, operating as an unlicensed Midwife, has been promoting her services via various social media channels and even has her own website.

Chief Deputy County Attorney Brenda Beadle said this is her first case in which an unlicensed midwife had been involved in a home birth that resulted in death reported Omaha.com.

Records indicate that around 9:25 p.m. on June 15, paramedics responded to a call from the home of 25-year-old Emily Noe, where, upon arrival found Hock attempting to help Noe with a partially delivered breech baby.

According to ABC News Hock then asked paramedics for medical scissors, which once in her possession, proceeded to perform an “obstetrical procedure of the peritoneum,” in an attempt to deliver the baby’s head from the womb. The procedure was unsuccessful.

Afterwards, the mother and partially delivered child were taken by paramedics to the Nebraska Medical Center. While en route, the baby was delivered by emergency medical staff.

According to a court affidavit, “The baby was eventually delivered by squad personnel while in route to the emergency room. The baby was limp and had no respirations or pulse.”

“Resuscitation efforts were performed at that time. The baby was taken to the Newborn Intensive Care Unit upon arrival at the hospital and placed on life support.”

Dr. Katherine Lessman, who was on call when Noe arrived, said that Noe told her she had been in labor for 24 hours, had known the baby was breech for two hours, and had been pushing for an hour in an attempt to deliver the baby prior to 911 being called.

According to KETV7, the court affidavit mentioned that the child had been “deprived of oxygen for approximately 10 to 12 minutes during the time that Hock attempted this delivery without medical assistance.”

As a result the baby girl, named Vera, suffered brain swelling and was later pronounced dead on June 17.

The affidavit mentioned that Noe told police her water broke around 9 p.m on June 14, and that Hock arrived the following morning at around 6 a.m. Hock asked Noe if she wanted to continue the birth at home, telling her that she had been trained in delivering breech babies.

Around 30 minutes into the birthing process, Hock indicated she wouldn’t be able to complete the delivery and suggested calling 911.

Lessman later told authorities that she believes the death could have been prevented had proper medical procedures been implemented.

Deputy County Attorney Molly Keane said in a statement that Hock “placed the child in a situation that endangered her life … and deprived (her) of necessary medical care.” She went on to say “Her actions in doing so resulted in the death of this child.”

KETV7 also reported that in an interview with Dr. Stuart Fishbein on Oct. 26, 2017, Hock said “I never want to be licensed because I don’t like rules and regulations.”

She also mentioned “If mom wants me to work with her and she has a breech or multiples, I don’t want anyone coming in and telling me I can’t do that.”

Community midwives aren’t just about BIRTH. They are healers, nurturers, and space holders for our community’s health and wellness. And yes, sometimes they do this for abandoned kittens too.#nebraskabirthkeeper #communitymidwife #nebraskahomebirth #traditionalmidwifery #morethanbirth

With home births being illegal in Nebraska, and midwives being required to deliver babies in recognized medical facilities, Hock defended her practice by saying “It means a certified professional midwife and traditional midwives are not mentioned in the law at all so basically it’s not illegal and it’s not legal. They’re not mentioned,” she said. “It’s like their licensing doesn’t exist.”

Hock is set to appear in court Friday.