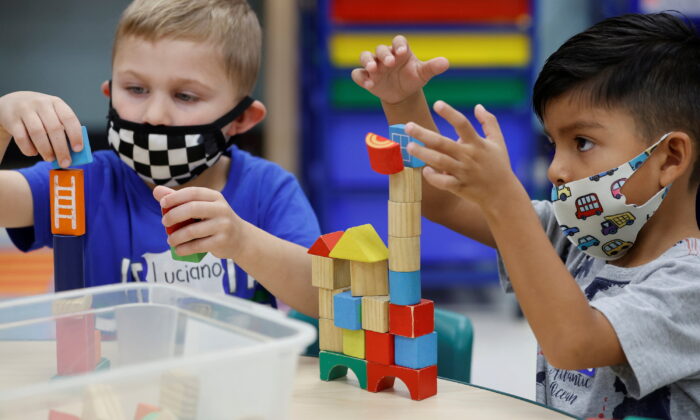 Moody, a Republican, made the comments in an interview on Fox News’ “Fox & Friends” program on Saturday.

“When I heard that young children as young as 2 years old would have to mask all day, even while outside, I told my team we have to be at the precipice of pushing back on this,” Moody said. “We filed suit. Not surprisingly, because it was unlawful and immoral at the time, the court gave an injunction,” she added.

Head Start is a federal grant program overseen by the U.S. Department of Health and Human Services (HHS) and is aimed at helping children from low-income households prepare for school for free.

The program may provide free transportation to education centers as well as other services and works with families, school districts, and other entities to “facilitate a smooth transition to kindergarten for each child,” according to HHS.

Approximately 744,898 children were enrolled in Head Start as of 2021, according to federal data compiled by the Annie E. Casey Foundation, and there are about 262,814 program staff members, according to the National Head Start Association.

Yet while the majority of children in the United States have started the school year in 2022 without the mask mandates and social distancing that were in place during the COVID-19 pandemic, children enrolled in Head Start will still be subject to these COVID-era policies.

A federal rule announced in November 2021 states that all children enrolled in Head Start who are over the age of 2 must wear masks indoors.

This is despite the Centers for Disease Control and Prevention (CDC) recommending in August that masks only be worn in areas with a high community transmission rate.

Additionally, Head Start staff members must either be vaccinated or undergo weekly testing.

However, the Biden administration is still fighting the injunction in court.

The Head Start program serves children in all 50 states, the District of Columbia, and six territories.

“In all of the states where you have attorneys general that said, ‘This cannot happen, we will not allow this insane federal policy that’s going to wreck child development to be applied in our states,’ there’s an injunction in place right now,” Moody said. “In states where you don’t have leadership … you are left with this federal mandate out there.”

Noting that Head Start is aimed at helping children from low-income families, Moody said that “those are exactly the children we need to be looking at faces while their teachers are speaking, understanding how to communicate.”

“Not only is it unlawful,” said Moody, “it is reprehensible to the well-being and the opportunity for the children from these communities.”

In a statement to Fox News, an HHS spokesperson acknowledged that the current guidelines are out of date compared to the CDC’s recommendations but said that the agency had stopped enforcing the mask rule earlier in 2022.

“The Administration for Children and Families’ Office of Head Start (OHS) notified programs on Monday, February 28, 2022, that it will not be evaluating compliance with the mask requirement during monitoring visits in light of updated CDC guidelines,” the statement read, noting that the pause applies to all Head Start programs.

At the start of the new school year in August, OHS sent a reminder to all Head Start programs that compliance with mask mandates would not be evaluated, the HHS statement added.