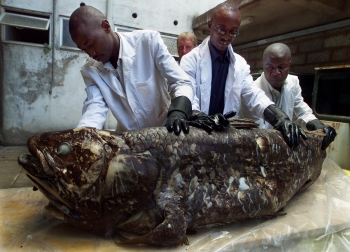 Members of the National Museum of Kenya show a Coelacanth, a species of prehistoric fish that scientists considered to be extinct for millions of years. (SIMON MAINA/AFP/Getty Images)
Science

Man is inevitably drawn toward mystery. Perhaps this is the fundamental principal behind one of the most controversial branches of modern science: “Cryptozoology.”

The “cryptids”—zoological species for which existence is suspected but where solid evidence remains elusive—has captured the imagination for centuries. The “Yeti”,”Big Foot” and “Lochness,” are some of the more well known examples of these slippery specimens, though even these are among the most sharply rejected by conservative cryptozoologists.

Contrary to the idea of the crazy pseudo-scientist pursuing imaginary beasts, cryptozoologists are convinced that our planet still shelters hundreds of biological species that zoology chooses to ignore. But is this feasible? Do there still exist places on Earth sufficiently unexplored that could hide species unknown to modern science? The answer seems to be a robust “yes.” It is not only the geographical knowledge that we posses which tells us so, but the idea has been availed in recent years by the appearance of many species that were either unexpected, or in many cases, were ruled out as the product of folklore.

No one questions the existence of gorillas, yet they were not scientifically defined until 1847. Before then, these grand primates were considered a legend of the indigenous Angolans, who called them “Pongo.” Another historical example of the ignorance of planetary fauna is the Coelacanth (Latimeria chalumnae), a species of prehistoric fish that science considered to be extinct for millions of years; meanwhile the native Indonesian fisherman frequently dined on this “myth.” Identified cases like the okapi, the onza, the Andean tapir, the warthog or the bamboo lemur, are just a few of these ‘new’ species.  They were known by the indigenous people of their respective areas, yet remained catalogued as exaggerations or legends prior to their official discovery.

I Thought I Saw a Little Monkey…

The exciting discovery of unknown species still happens today. In the last three years scientists have found carnivores and rodents, which were supposedly extinct, and various marine species whose existence was merely suspected—such as the new species of giant squid discovered in 2003, or the very indiscreet giant jellyfish dubbed Granrojo, identified in the same year. It is also worth remembering the multitude of fish discovered after the 2004 tsunami in the Indian Ocean, and the plethora of unknown plant, bird and frogs recently discovered in the mountainous region of Papua. Another resounding example is the “Ebu Gogo,” a small humanoid creature (homo floresiensis), who is thought to have lived alongside modern man. And don’t forget the mysterious race of giant apes of the Congo found in the last decade that possesses a peculiar mix of gorilla and chimpanzee. The local indigenous hunters referred to the apes as “lion assassins,” giving a clear indication of the aggressiveness and size of this species.

A recent case of a new animal species is that of a strange creature found decomposing on the coast of Russia in 2006, resembling a large crocodile with fur. The animal was taken in for studies by the Russian military, but its whereabouts are currently a mystery.

What Still Remains to Discover

Among the great land mammals, between 1937 and 1993, an average of one new species has been found every six years; since 1980 this pace has increased to one species every two years. Add to that the innumerable insects and small animals that are found on remote scientific expeditions. Our planet is plagued with places scarcely explored or not explored at all, such as the Amazon, the Siberian forests, or high snow-capped peaks, where any number of biological treasures may take shelter, such as snakes, sloths, and giant rodents, the Orang Pendek (a supposedly bipedal primate), the Mokèlé-mbèmbé (a dinosaur from the remote basins of the Congo and Zambeze rivers said to have survived extinction) or the yet to be verified felines of Africa.

When it comes to the sky, there are also hundreds of small birds that science has still not acknowledged. It’s likely that are even great winged species still to be found, like the legendary “thunderbird” told in various indigenous stories. In the years 2002 and 2004, images of birds of enormous size were obtained, flying across Alaska. The species was not identified.

Among Earth’s uncharted regions, our seas are actually the most ignored area of all. Science has been able to explore about 3 per cent of our oceans, and the number of biological species far exceeds those found on land. We don’t even know what rare specimens have been hiding themselves in the obscurity of these deep waters. Sailers talk of giant monsters such as the “Kraken,” which could either be the exaggerated imagination of a long sea voyage, or a possible reality. To cite one example from several years ago, as Japanese scientists were taking photos of sharks near the Mariana Trench (the deepest known oceanic trench), an enormous animal 200 feet long appeared on the monitor and immediately terrified the sharks. The scientists were unable to identify this mysterious specimen. This is just one of many cases of a sighting astonishing onlooking experts.  It remains clear that whether in the air, on land, or under the ocean there still exist many legends to discover.