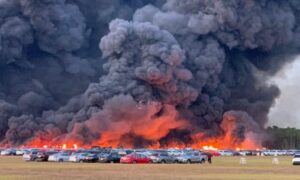 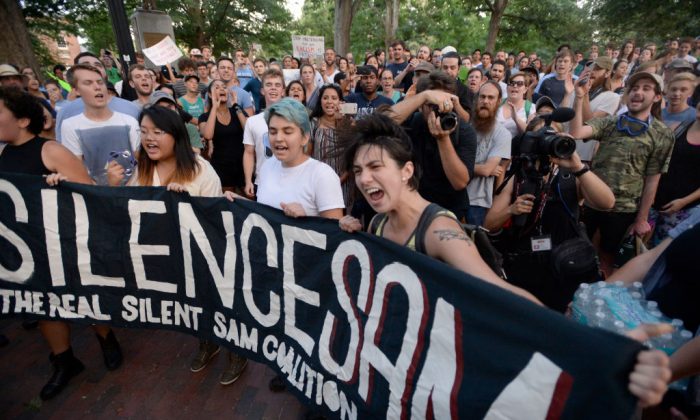 Demonstrators call for the removal of a Confederate statue, coined Silent Sam, on the campus of the University of North Carolia at Chapel Hill, in Chapel Hill, N.C., on Aug. 22, 2017. (Sara D. Davis/Getty Images)
US News

The University of North Carolina at Chapel Hill recommended a new building to house the Silent Sam statue, months after it was illegally torn down by activists.

The statue honors alumni of the university who fought for the Confederacy during the Civil War.

In a report released by the university’s board of trustees and Chancellor Carol Folt (pdf), the board recommended creating a new building that would be known as the University History and Education Center.

“This plan requires the construction of a new free-standing, single-use building with appropriate buffers, and state-of-the-art security measures, as well as the development of excellent exhibits and teaching materials,” the report stated.

The new center would cost approximately $5.3 million to build and be completed in 2022 if the schedule proceeds as projected.

It would cost approximately $800,000 in annual operating costs.

The North Carolina Historical Commission would need to approve the building and it would take about 18 months to get the necessary government approvals, the report said.

The board of trustees said it considered a range of factors, including public safety, cost, and preservation of the artifacts. It explored moving the statue off-campus but noted that it’s not currently allowed by state law.

State law requires the Soldiers’ War Memorial, or Silent Sam, to be reinstalled within 90 days from the date it was torn down, according to one of the board of governors, Thom Goolsby.

He said the people who tore down the monument committed a hate crime.

Folt said in a statement that the preservation of the monument will help tell a “long and complicated history.”

“I understand there are strong emotions about this proposal. As the nation’s first public university, Carolina has a long and complicated history we must tell. We are recommending to build a center to tell all of that history, which includes the Confederate monument,” she said.

“This is so important to us that we are going to make it happen,” Folt said during the meeting, reported the campus outlet The Daily Tar Heel. She emphasized that she’d prefer the statue be off campus but had to follow the 100-2.1 state law.

“I have a preference to move it off campus but, like everyone here, I swore to obey the law,” Folt said. “And sometimes you don’t agree with laws. But I don’t have the privilege of choosing which laws I agree with and which ones I do not.”

Supporters of keeping Confederate statues such as Silent Sam up say they’re part of the nation’s history and should be remembered. Opponents say that Silent Sam and other Confederates were racist and keeping the statues up isn’t necessary.

In the report, the board and Folt described the tearing down of the monument as “unlawful behavior.” The board noted that some people wanted Silent Sam to be placed back where it was before it was torn down.

“We do not condone the manner in which the monument was toppled, and fully support and will continue to support holding people accountable who engage in unlawful conduct,” it stated.

But “The university faces a high risk of violence, civil disorder, and property damage if the monument is restored to its original position,” it added later, citing the findings of a Safety Panel convened in the aftermath of the removal of the statue.

And placing the monument in any open area “will draw significant local, state, and national attention and significant protest actions will likely resume.”

“It will literally be under siege,” it said. That’s why the building is needed, the board said.