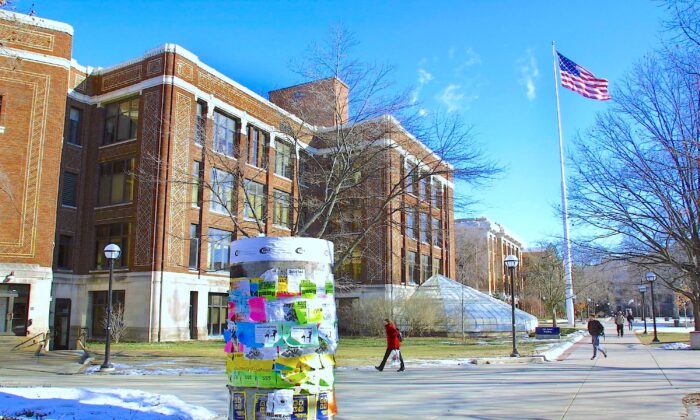 The University of Michigan on Saturday announced it has fired its president, Mark Schlissel, after learning via an anonymous complaint last month that he “may have been involved in an inappropriate relationship with a University employee.”

“On Dec. 8, 2021, via an anonymous complaint, we learned that Dr. Schlissel may have been involved in an inappropriate relationship with a University employee,” the statement continued. “After an investigation, we learned that Dr. Schlissel, over a period of years, used his University email account to communicate with that subordinate in a manner inconsistent with the dignity and reputation of the University.”

The university also released almost 120 pages of redacted email communications (pdf) allegedly between Schlissel and the unnamed university employee who is referred to as “Individual 1” in the interest of full public disclosure.

“All this information is available on the University’s website. Our community and our state deserve as complete an understanding of this situation as possible,” the university said.

As per the redacted email communications, the former president and the unnamed university employee appear to have been speaking in a consensual manner between 2019 to 2021. The correspondence shows multiple messages pertaining to planned travel and dinner and drinks arrangements between the two.

One of the emails included a 2019 New Yorker article titled “Sexual Fantasies of Everyday New Yorkers.” Schlissel indicated in the subject box it was an “article you couldn’t download.”

Another shows that Schlissel wrote, “What if we miss our connection and get stuck in Paris” along with a flight confirmation email to India.

In a July 1, 2021 exchange, the university employee wrote that her “heart hurts,” to which Schlissel responded: “I know. mine too.” He continued, “This is my fault.”

He later followed the message up with: “Just wanted to apologize for my response to your ‘heart hearting’. I should have left it with ‘I’m sorry’ since this is my fault and although I am in pain as well, it’s not the same at all. I still wish I were strong enough to find a way.”

The Epoch Times has reached out to Schlissel for comment.

According to the university’s policy on supervisor-employee relationships, which was introduced last July, a supervisor “may not, implicitly or explicitly, initiate or attempt to initiate an Intimate Relationship with a Supervisee over whom they exercise supervisory authority.”

“In addressing Intimate Relationships in the work environment, the University is guided by its core values and principles. Most importantly, the University will maintain a workplace that is inclusive and free from abuse of power, coercion, sexually harassing conduct, and favoritism. Such conduct will not be tolerated,” the policy reads.

On Saturday, the University Board named former University of Michigan President Mary Sue Coleman as interim president, adding that it has “full confidence that she will provide the leadership our University community needs during this critical time of transition.” Coleman is expected to serve in the position until a new president is named, which the university said will likely be this summer.