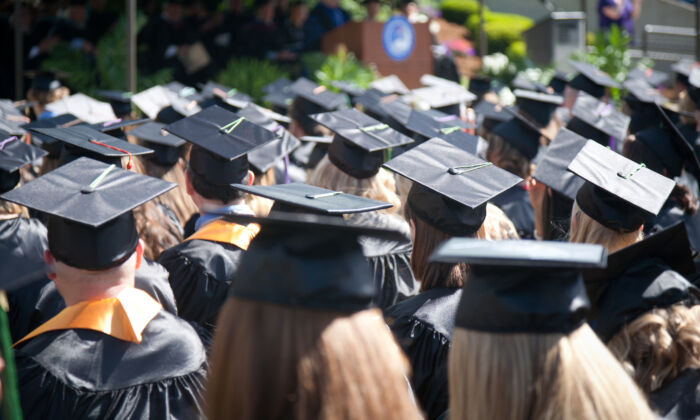 The University of Maryland’s Baltimore campus (UMB) is seeking students to work as writing consultants, with a background in “anti-racist” coursework or activism as one of the preferred qualifications for applicants, according to the school’s website.

Consultants at the university’s writing center offer assistance and feedback to other students, postdoctoral researchers, and faculty to improve research papers, resumes, cover letters, grant applications, publications, and other materials, the website states. As such, writing consultants who lean into “anti-racist” ideas may end up spreading such ideology and influencing their clients.

One of the essay questions on the job application alludes to that.

“As you can see in our mission statement, we express commitment to interrogating racism and white supremacy and injustice broadly,” the question reads. “How would you want your work as a consultant to contribute to and expand your personal, scholarly, and professional work related to justice and equity?”

On the list of primary duties for consultants, the application states that in every client appointment, consultants should “apply research-based strategies for centering linguistically and culturally diverse writing practices as academic and social norms.”

UMB isn’t the first school asking that applicants for jobs show their commitment to “anti-racist” ideologies.

In November 2021, Pennsylvania State University advertised for an assistant professor of architecture position, which dealt primarily with architectural materials, construction methods, and processes, Fox News reported. However, the application also stated that the ideal candidate would work to “establish a culture of anti-racism and anti-oppression.”

The Epoch Times reached out to the university for comment.

In April, Florida Gov. Ron DeSantis signed HB7 into law, also known as the “Stop WOKE Act,” which prohibits the inclusion of critical race theory (CRT) in school curriculum. The law bans schools and businesses from imposing collective guilt on students, faculty, or employees for past actions committed by members of their race.

It also bans teaching that anyone is privileged or oppressed because of their race.

Following the death of George Floyd in 2020, the English department at the University of Central Florida issued a statement that “unconscious bias and white fragility are pervasive throughout society,” which is a core tenet of CRT. The statement said that university faculty weren’t immune to those problems.

The department also stated that it had been complicit in perpetuating “colonialist and racist practices and power structures,” and that the field of English and literature has “upheld a canon of literature that is exclusive, elitist, and blindingly white.”

After the Stop WOKE Act went into effect in July 2022, the university removed the statement, as it was in violation of the law.

A legal challenge was mounted against the implementation of the law. However, a court dismissed claims from the plaintiffs and allowed the law to take effect on July 1. The judge pointed out that the plaintiffs, who included a group of teachers and students, failed to prove injury and thus had no standing to file a lawsuit.