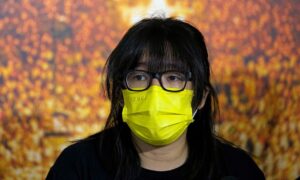 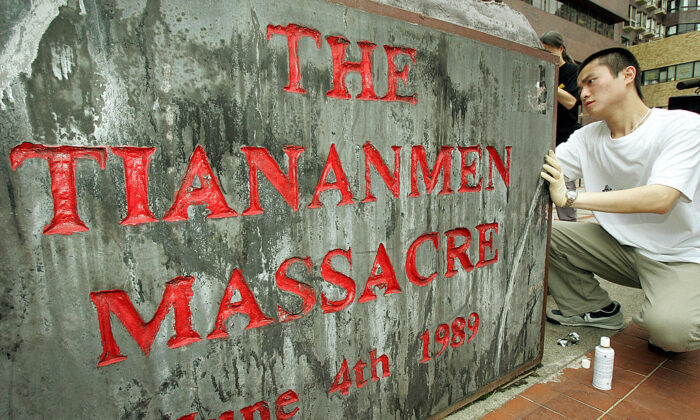 A Hong Kong University student cleans a plaque on May 4, 2005, below the "The Pillar of Shame," a monument constructed to honor the dead and to shame the Chinese Communist Party that refused to apologize for the Tiananmen Square massacre—the killing of students on June 4, 1989, in Beijing's Tiananmen Square. (MIKE CLARKE/AFP via Getty Images)
HK Protests

The oldest public university in Hong Kong, the University of Hong Kong (HKU), has ordered the removal of a statue from its campus that have for many years commemorated the victims of the Chinese Communist Party’s (CCP’s) Tiananmen massacre in 1989.

The statue dubbed the “Pillar of Shame” was created by Danish sculptor Jens Galschiøt and has been standing in the university for more than 20 years.

The 26-foot high copper statue depicts 50 anguished faces and tortured bodies piled on one another. It was the centerpiece of Hong Kong’s candlelit vigil on June 4 to commemorate those killed when Chinese regime’s military opened fire on unarmed pro-democracy college students and citizens in Beijing.

The organizer of the city’s huge annual Tian’anmen vigil that worked with Galschiøt, Alliance in Support of Patriotic Democratic Movements of China, recently dissolved due to the CCP’s increased pressure to silence political opposition to its rule in Hong Kong and China.

The alliance is a pro-democracy organization that was established during the Tiananmen Square protests. Several of its members have been arrested under the Beijing-imposed so-called Hong Kong national security law. The alliance is going through a liquidation process at the moment.

The liquidators of the alliance received a letter dated Oct. 7 from law firm Mayer Brown representing the university, asking the alliance to remove the statue from university premises “no later than 5:00 p.m. on 13 October 2021.”

The university cited that its decision was made based on its own legal advice and risk assessment, but didn’t provide further explanation, according to media reports.

If the alliance fails to remove the statue by the deadline, the statue will be deemed abandoned and “the university will deal with the sculpture at such time and in such manner as it thinks fit without further notice,” according to the letter seen by Artnet News.

Galschiøt sees the action as an attack on his freedom of expression through his art and an attempt to erase history.

“They really want to destroy everything about a story that China doesn’t want people to know about,” Galschiøt told Artnet News.