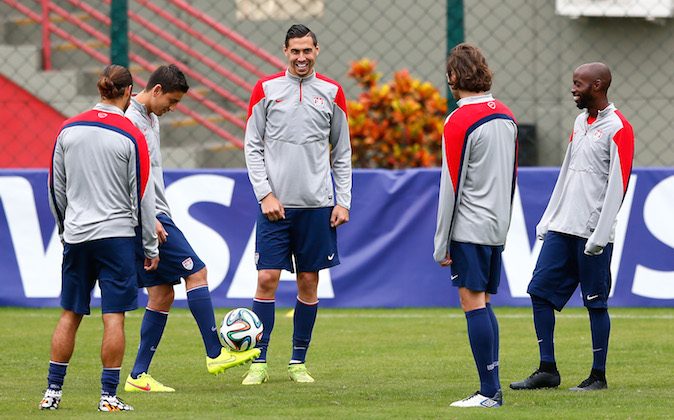 The United States will take on Portugal on Sunday, June 22 in a World Cup 2014 Group G match.

Ronaldo’s Fitness Key in USA vs Portugal at World Cup

MANAUS, Brazil (AP) — With Cristiano Ronaldo, Portugal still has a chance to reach the second round at the World Cup. Without him, the advantage might just switch to the United States.

Ronaldo has been carrying an injury to his left knee, and the world player of the year was seen using an ice pack on it during training on Wednesday. But he is still expected to play against the Americans on Sunday at the Arena da Amazonia in a match that Portugal can’t afford to lose.

“Cristiano is 100 percent fit to play,” backup Portugal goalkeeper Beto said this week. “Every match, if he starts to play, it is because he is fit to play.”

The Portuguese lost 4-0 to Germany in their opening Group G match, with Ronaldo playing despite the injury.

The United States, however, is going in the other direction. After being knocked out of the last two World Cups by Ghana, the Americans beat the African team 2-1 in their opening match and could even secure a spot in the second round this weekend.

If Germany beats Ghana on Saturday, and the Americans find a way to win on Sunday, then Portugal and the Ghanaians will be eliminated.

Ronaldo could have something to say about that, however.

“It’s going to be something that we’re going to always be aware of him,” United States midfielder Kyle Beckerman said. “Everybody’s going to have to have an eye when we’re on offense, on defense, and it’s going to take 11 guys playing offense and defense to win this game.”

Ronaldo has been one of the best players in the world for about a decade, and last year he even usurped Lionel Messi by ending the Argentina forward’s streak of winning the FIFA Ballon d’Or.

He has also excelled on the world stage, helping Portugal reach the 2004 European Championship final and the 2006 World Cup semifinals. The team also advanced out of the group stage at both Euro 2008 and the last World Cup, and then reached the semifinals at Euro 2012.

Although the Americans won their opening match, the defense looked shaky as Ghana attacked throughout. They can expect more of the same from Portugal.

And that means something is probably going to have to change if they want to get all three points.

“Absolutely. I think our best defense is offense,” Beckerman said. “We have to be extremely clean with the ball.”

Portugal has several other world-class players in its squad, but not all of them will be available for the match against the Americans.

Defender Fabio Coentrao, Ronaldo’s teammate at Real Madrid, has been ruled out of the rest of the World Cup with a muscle strain. And striker Hugo Almeida limped off mid-way through the first half against Germany with a muscle injury.

The starting lineup, however, won’t affect the team’s need for points, or the Americans’ game plan.

“We’ll see what happens if they come out a little different because they need the win,” Beckerman said. “We’ll be ready for them trying to come after us or sitting back, either one. We’ve got to be ready for everything.”