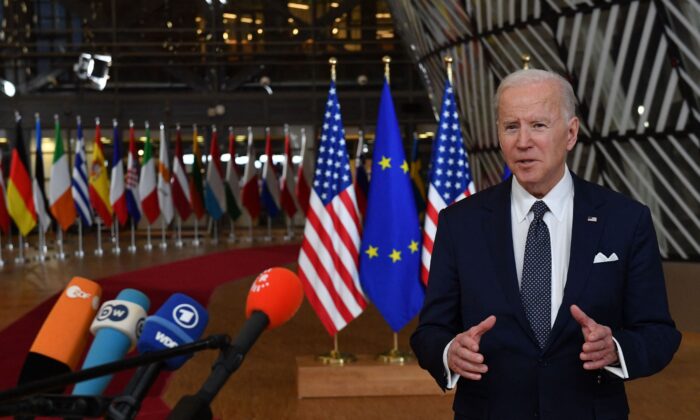 Washington is planning to allow Ukrainian refugees entry into the United States as part of humanitarian efforts to help the country battling against a Russian invasion.

“While we expect many Ukrainians will choose to remain in Europe close to family and their homes in Ukraine, today, the United States is announcing plans to welcome up to 100,000 Ukrainians and others fleeing Russia’s aggression through the full range of legal pathways, including the U.S. Refugee Admissions Program,” said a March 24 White House Fact Sheet.

“In particular, we are working to expand and develop new programs with a focus on welcoming Ukrainians who have family members in the United States.”

The United States has provided over $123 million since Feb. 24 to neighboring nations and the European Union to host Ukrainian refugees. This includes $48 million granted to Poland, $30 million to Moldova, $10 million to Romania, $9 million to Hungary, and $4 million to the Slovak Republic.

Over 3.6 million Ukrainians have fled the country since the war began, according to data from the United Nations High Commissioner for Refugees (UNHCR).

Poland has received the highest number of refugees, with more than 2.17 million Ukrainians entering the country. Romania has accepted over 500,000 refugees while Moldova and Hungary have both taken in more than 300,000 refugees each.

Speaking to Reuters, Julia Gelatt, a senior policy analyst with Migration Policy Institute (MPI), welcomed the U.S. commitment but said that “there are a lot of questions” about how fast and how much Washington can help. Ukrainians with relatives in the United States will likely be using family-based visas to gain permanent residency in the country.

However, their petitions will only add to an already massive backlog of hundreds of thousands of unprocessed visa applications, Gelatt said. Ukrainians might seek to use the humanitarian parole program to enter the country. But this specific program does not provide permanent residency.

President Joe Biden had set a goal to resettle 125,000 refugees for the fiscal year that began in October. Almost five months in, 6,500 refugees have been admitted.

Biden committed to resettling 100,000 Ukrainians in his remarks at the NATO headquarters on March 24. He also announced funds to help refugees from the war-torn nation.

“I’m announcing the United States have prepared to commit more than $1 billion in humanitarian assistance to help get relief to millions of Ukrainians affected by the war in Ukraine,” Biden said. “And we will invest $320 million to bolster democratic resilience and defend human rights in Ukraine and neighboring countries.”