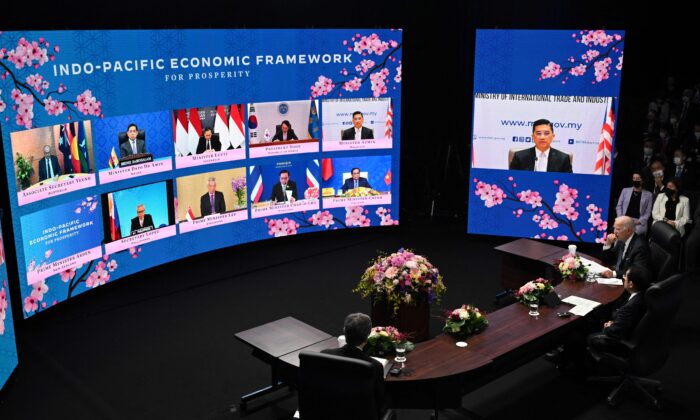 U.S. President Joe Biden and Japanese Prime Minister Fumio Kishida attend the Indo–Pacific Economic Framework for Prosperity with other regional leaders via video link at the Izumi Garden Gallery in Tokyo on May 23, 2022. (Saul Loeb/AFP via Getty Images)
Asia & Pacific

The United States and 13 nations on Sept. 9 concluded the first round of in-person meetings for the Indo–Pacific Economic Framework (IPEF) with a consensus on ministerial statements for four key pillars.

The U.S. Commerce Department said the 14 IPEF member nations, which represent more than 40 percent of the global economy, will focus on the pillars of trade, supply chain resilience, clean energy, and fair economy.

“After several days of intensive discussions, we have made real progress toward that goal. And the ministerial statements demonstrate our innovation and ambition,” Tai said in her closing speech.

“Our intention now is to move towards negotiations with our partners on each pillar, with the first round of discussions taking place after this ministerial.”

The IPEF will not include tariff cuts that are the bedrock of traditional free trade deals, but the talks are part of a U.S. effort to reengage economically with countries in Asia.

U.S. Commerce Secretary Gina Raimondo, who was also present at the meeting, said that a second ministerial IPEF meeting is expected to take place early in 2023, though she didn’t provide a specific date.

India Opts Out of Trade Pillar

Indian Commerce and Industry Minister Piyush Goyal said that India will join three pillars of the framework focusing on supply chains, tax and anti-corruption, and clean energy, but will opt out of the trade pillar for now.

“On one pillar, which deals primarily with trade, the contours of the framework—particularly on commitments required on the environment, labor, digital trade, and public procurement—are still emerging,” Goyal said in a statement.

“We have to see what benefits member countries will derive and whether any conditionalities on aspects like the environment may discriminate against developing countries who have the imperative to provide low cost and affordable energy to meet the needs of our growing economy.”

The U.S.-led IPEF is supposed to fill the void left after the United States withdrew from the Trans-Pacific Partnership.

President Joe Biden said in May that the initiative will focus on matters related to “ensuring economic competitiveness in the 21st century.”