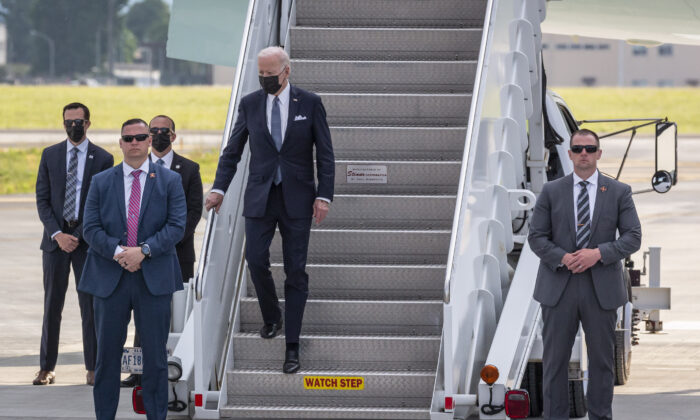 U.S. President Joe Biden arrives at Yokota Air Base on May 22, 2022 in Fussa, Tokyo, Japan. President Biden arrived in Japan after his visit to South Korea, part of a tour of Asia aimed at reassuring allies in the region. (Yuichi Yamazaki/Getty Images)
Asia & Pacific

President Joe Biden is launching a new Indo-Pacific Economic Framework for Prosperity (IPEF) with 12 other countries in the region, which together are signing up as the first members of the economic partnership focusing on the Asia-Pacific.

Australia, Brunei, India, Indonesia, Japan, Republic of Korea, Malaysia, New Zealand, the Philippines, Singapore, Thailand, and Vietnam have signed up to be part of the IPEF initiative. The new collective won’t include China or Taiwan.

The U.S.-led IPEF is supposed to fill the void left after the United States withdrew from the Trans-Pacific Partnership. The initiative seems to reassert American dominance in face of increasing Chinese influence in the region, and will focus on matters related to “ensuring economic competitiveness in the 21st century,” Biden said during a visit to Tokyo to announce the framework.

Besides the IPEF launch, Indo-Pacific leaders are also congregating in Tokyo for a second face-to-face Quad Summit.

According to a May 22 White House press gaggle, national security adviser Jake Sullivan said a potential Taiwanese invasion “won’t be part of the formal agenda of the Quad,” but the countries will discuss “significant security issues in the Indo-Pacific.”

Sullivan told reporters that the United States continues to work closely with Taiwan, looking to “deepen our economic partnership with Taiwan, including on high-technology issues, including on semiconductors and supply chains,” considering the importance of the self-ruled island in global supply chains. He also reiterated U.S. support for the One China policy guided by the Taiwan Relations Act, three joint communiques, and six assurances.

Ahead of the formal launch of the U.S.-led framework, Chinese Foreign Minister Wang Yi said in a May 22 statement that the United States was forming “small circles” under the banner of “freedom and openness” to contain China.

“Facts will prove that the so-called Indo-Pacific strategy is in essence a strategy to create division, to incite confrontation, and to undermine peace,” he said.

On whether IPEF will be a “closed club,” as alleged by Beijing, Sullivan said it has already secured a wide-ranging membership and that “in addition to the countries that join for the launch tomorrow, others will come along in the months and years ahead.”

The IPEF is “not a security arrangement” and will deal with mostly economic policies, focusing on digital economies and “secure and resilient supply chains,” he said.

Besides this, the program seeks to bind regional countries more closely through common standards in areas such as infrastructure and clean energy.

Japanese Prime Minister Fumio Kishida told reporters ahead of the formal IPEF launch that while China is currently demonstrating a significant economic presence in the region, other countries in the region don’t believe that it’s living up to its international obligations.

“Look into the substance of their presence: Are they abiding by international rules? What about their development projects. Are they caring about sustainable initiatives? They have to do that because they are a major power. They have a significant responsibility even in the economic field; they have to live up to that responsibility. So Japan will cooperate with the United States, and vis-a-vis China, persuade them to live up to their responsibility to abide by international rules,” Kishida said.

Since the COVID-19 pandemic, global supply chains have been greatly disrupted, contributing to product shortages across the world and also to inflationary pressures.

The Russian invasion of Ukraine has exacerbated the problem with the closure of Ukrainian ports that has resulted in increased food prices and related shortages, especially in vulnerable regions of Africa and Asia. The Chinese Communist Party’s “zero-COVID” policies keeping Chinese in lockdown are also contributing to global supply pressures.

Japan wants more nations to join the IPEF, which may result in its May 23 launch marking a start of discussions rather than finalizations.

Regarding the U.S. ability to build mutually beneficial alliances in Asia against the backdrop of China’s economic slowdown, Sullivan said, “When you see the breadth of participation in IPEF tomorrow, we believe that that will be strong evidence that countries do want to bet on the United States [and] do want to be part of an economic arrangement with the United States where we’re setting rules together.”