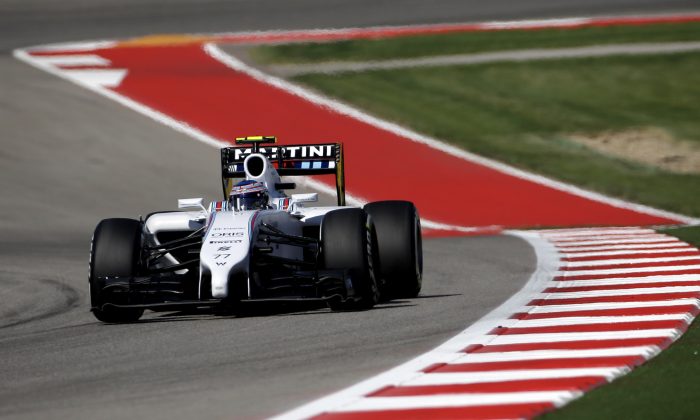 Williams driver Valtteri Bottas, of Finland, drives through the course during qualifying for the Formula One U.S. Grand Prix auto race at the Circuit of the Americas, Saturday, Nov. 1, 2014, in Austin, Texas. (AP Photo/David J. Phillip)
Motorsports

The United States Grand Prix is set to take place on Sunday, November 2.

The race is slated to start at 3 p.m. EDT in Austin, Texas.

The race will be broadcast on NBC in the United States, Sky Sports F1 in the United Kingdom, Sky Sport in New Zealand, and Fox Sports in Mexico, Central America, and South America.

RTL in Ireland, TSN in Canada, OTE TV in Greece, on M1 in Hungary, Sky F1 in Italy, MTV Max in Finland, Polsat Sport in Poland, SLO 2 in Slovenia, Sport1 in The Netherlands, BBC in Belgium, RTL or Sky Deutschland in Germany, Nova in the Czech Republic, TV3+ in Denmark, SportTV in Portugal, Abu Dhabi Sports 2 in the United Arab Emirates, and Star Sports 4 in India are among the other broadcasters.

See qualifying results, current driver positions, and a preview below.

At Circuit of the Americas
Lap length: 3.426 miles
Third Session

Rosberg on pole, boycott threat at US Grand Prix

AUSTIN, Texas—Nico Rosberg earned a chance to tighten his Formula One championship duel with Mercedes teammate Lewis Hamilton by winning the pole position Saturday for the U.S.Grand Prix, while the race faced an early threat of a boycott by several teams that are struggling financially.

Rosberg edged Hamilton by .376 seconds at the Circuit of the Americas. Valtteri Bottas of Williams will start third.

Hamilton leads Rosberg by 17 points in the drivers’ championship with three races left.

Saturday’s qualifying was clouded by the roiling tensions between Formula One’s wealthiest teams and those struggling to survive. Two teams, Marussia and Caterham, had already dropped out of Sunday’s race because of financial problems, reducing the grid to at most 18 cars, the smallest in nine years.

For most of the day, it looked as if it could get much smaller.

Sahara Force India deputy principal Bob Fernley said his team, Sauber and Lotus discussed a potential Sunday boycott or pulling out after one lap, and insisted both options could happen.

But the threat seemed to fade by late afternoon.

Then Formula One commercial boss Bernie Ecclestone and Circuit of the Americas Chairman Bobby Epstein said the teams will race.

The mere threat of action conjured images of the disastrous U.S. Grand Prix of 2005, when a boycott over tire safety left only six cars racing. Winner Michael Schumacher was booed on the podium, the traditional champagne celebration was canceled and the public address announcer implored fans not throw things.

The current conflict between top teams and those struggling to survive reached the critical stage this week with the collapse of Marussia and Caterham.

Lotus, Sahara Force India, and Sauber sparred with Mercedes and McLaren officials in a contentious news conference Friday, arguing whether Formula One should adopt spending caps or other means to help smaller teams survive.

Ecclestone further enflamed the situation by telling Sky Sports that small teams are needed only “if they are going to be there performing properly and not moving around with begging buckets.”

Rosberg and Hamilton, who have waged a season-long duel for the title, declined comment on the boycott threat.

Former Formula One world champion Jackie Stewart said a boycott would harm the teams, their sponsors and Formula One just three years into the sport’s re-emergence in the American market.

“I can’t imagine that would be a sensible thing for any team to do,” Stewart said. “Formula One is the largest commercial sport in the world. That’s the last thing you want to be playing around with.”

The small teams don’t want to damage Formula One but want to be heard, Fernley said.

“The last thing anybody wants to do, particularly the owners of these three teams, who are pure racers, would be to damage anything,” Fernley said. “But you’ve also got to understand that Formula One is also damaging them at the moment. There has to be some form of coming together.”

On the track, Rosberg earned his ninth pole of the season as Mercedes locked up the top two spots for the 10th time.

“First place today is awesome,” Rosberg said, “but it’s the race that counts.”

Hamilton posted the fastest times in all three practice sessions, only to have problems with locking brakes in qualifying. Hamilton is chasing his ninth victory of the season. He has won three times when starting outside of the pole and won here in 2012 with McLaren.

Rosberg has four wins this season.

Defending race and world champion Sebastian Vettel of Red Bull will start Sunday from pit lane after incurring a penalty for using his sixth engine this season. He participated in only the first of three qualifying rounds.