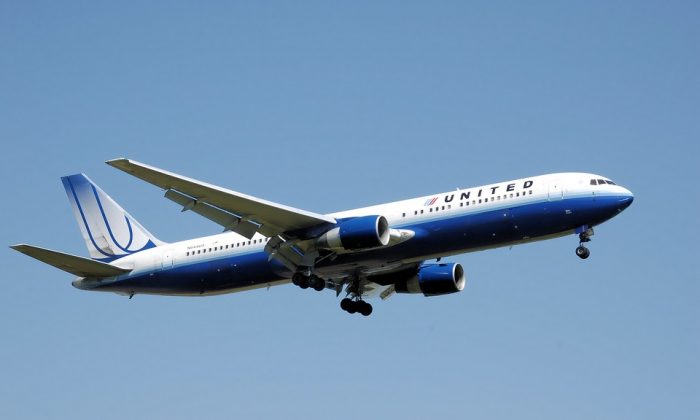 Stock image of a United Airlines plane. (Skeeze/Pixabay)
US News

A passenger on a United Airlines partner flight is accused of assaulting a flight attendant on a plane before charging at responding officers when the plane landed in Newark, New Jersey, according to the Port Authority of New York and New Jersey.

Six officers suffered non-life-threatening injuries during the incident, Port Authority spokesman Scott Ladd told NJ.com. Officials had responded to a report of an assault on a flight attendant on a flight that arrived from Washington.

When the plane stopped and the door was opened, 28-year-old Matthew Dingley, of New York, charged at Port Authority officers. Some of them fell down the plane’s stairs, leading to injuries, according to Ladd.

Six officers and the flight attendant were hospitalized, the official said.

A passenger on the plane said Dingley tried to enter the cockpit.

“This guy was in a full sprint, right up to the cockpit, hits the cockpit, starts banging on it,” passenger Mike Egbert told NBC New York. When a flight attendant tried to stop him, he attacked her, Egbert said, describing her as a hero for trying to stop him.

Egbert added that a passenger on the plane appeared to have some law enforcement training and was allegedly able to subdue Dingley.

Egbert described the incident further: “He picks up a police officer, throws the police officer…his back. If he did actually get into that cockpit lord knows what would have happened.”

“CommutAir flight 4965, operating as United Express from Washington Dulles to Newark, landed without incident and was met by local law enforcement due to a disruptive passenger. Our primary concern is always to ensure the safety of all customers and crew and we are cooperating with authorities. We express our gratitude for the quick reaction of our passengers and crew who responded during this incident,” the spokesperson told Fox News.

As reported by NJ.com, the suspect was placed in the Essex County Correctional Facility after he was charged with aggravated assault, criminal trespassing, resisting arrest, and interfering with transportation.

According to the NBC report, Dingley was arrested in 2016 for leading police on a chase in North Carolina. In 2017, he was found guilty of DWI in New York. It’s not clear if he has an attorney.

Other details about the incident were not provided. The alleged assault took place Jan. 9.