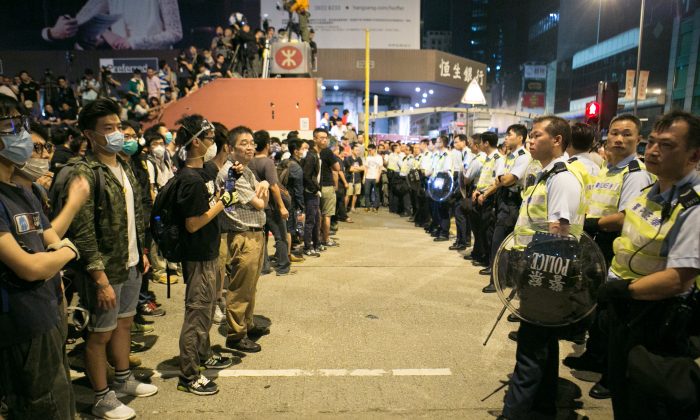 Pro-democracy protesters stand off with the police after they were trying all night to shutdown parts of Argyle Street and Nathan Road in Mong Kok, Hong Kong, on Oct. 18, 2014. (Benjamin Chasteen/Epoch Times)
China

HONG KONG—A panel of United Nations experts on Thursday called on China to allow real universal suffrage in Hong Kong, the latest sign of international pressure and attention on the People’s Republic of China over its restrictions on Hong Kong’s political system, after tens of thousands of pro-democracy protesters have occupied major roads in the financial center for nearly a month.

Chinese communist authorities say they have already provided Hong Kong with universal suffrage. But the definition provided by the panel of 18 UN experts, differs from China’s.

Konstantine Vardzelashvili, the chair of the UN review session, said that “universal suffrage … means both the right to be elected as well as the right to vote.”

“The main concerns of Committee members were focused on the right to stand for elections without unreasonable restrictions,” she said, in statements made at the conclusion of the panel.

The panel, part of the United Nations Human Rights Committee, monitors Hong Kong’s compliance with the International Covenant on Civil and Political Rights, a bedrock standard of human rights around the world.

Hong Kong, a former British colony, has since 1997 been a special administrative region of the PRC under a “one country, two systems” model. For decades Hong Kong activists have fought for the right to vote and stand in elections freely. Most recently they have been thwarted by decisions in Beijing which force candidates for the chief executive, the top position in the city, through a political sieve. Chinese authorities say that the Hong Kong public will be presented with two or three candidates that have effectively been vetted for their loyalty to the regime. Hong Kong citizens worry that such individuals will have little incentive to represent the interests of Hong Kong citizens.

The remarks by the ICCPR review panel were a follow up to recommendations put forward in March 2013 for Hong Kong to allow genuine universal suffrage. Chinese authorities responded last week that it was already trying to “forge consensus within the community so as to realize the implementation of universal suffrage.” The version of “universal suffrage” proposed by the regime, however, was found unsatisfactory to the United Nations panel.