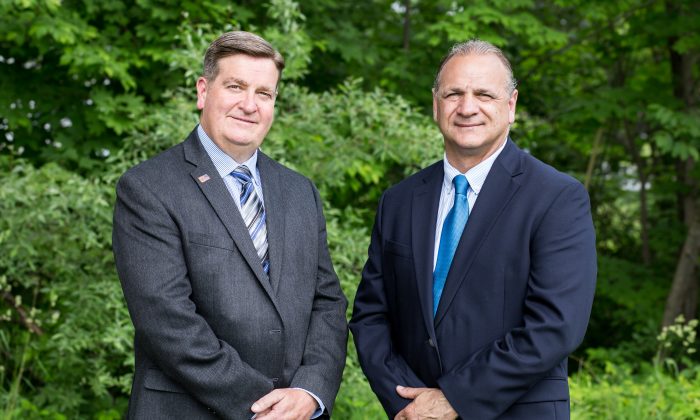 United Monroe Hopes for More Transparency From Town Board

MONROE—Resistance to the annexation of a portion of the Town of Monroe by the Village of Kiryas Joel continues unabated. The political action organization United Monroe and its president Emily Convers are taking the lead, and elements in Kiryas Joel itself have also joined in opposing the expansion of the village.

United Monroe celebrated a big victory with the landslide election of the group’s two candidates, Tony Cardone and Mike McGinn on Nov. 4. They defeated two incumbents, Dan Burke and Dennis McWatters, who had voted for the annexation. McWatters withdrew his candidacy just before the election.

The winning candidates each got about 2,600 votes from Kiryas Joel alone.

Cardone and McGinn each won by a 2-1 margin, with each claiming over 8,000 votes each. The candidates each got about 2,600 votes from Kiryas Joel alone.

Convers is quick to credit the support and votes of the KJ Alliance and the KJ Committee for Peace and Harmony headed by Rabbi Joel Loeb.

In early September the Monroe board approved a request from Kiryas Joel to annex 164 acres, while denying a request for a larger annexation of 507 acres. The decision brought to a climax a struggle that had lasted 20 months.

When Cardone and McGinn take their seats in January on Monroe’s five-member board, Convers hopes that at least one other board member will work with them to effect change.

Convers said town members are hoping for “more transparency, more good government, more fiscal responsibility, and more just repairing what has been broken in the last few years with the volatile, manipulative board that we have right now.”

The town board met on Nov. 30 to propose a new law that would make significant zoning changes in the town. Convers said that the proposed zoning change was to push through a ban on accessory housing, known as mother-daughter homes, outside the village of Kiryas Joel. Supervisor Harley Doles refused to extend the public comment period despite the holiday season. Convers suggested the board intends to push the law through before the new board members take their seats in January.

Rabbi Loeb said this makes annexation the only way to accommodate more Hasidic Jewish families to the area and is being used to punish the KJ Alliance for supporting Cardone and McGinn. An estimated 170 town residents attended the board meeting.

How the election can impact the annexation issue is not yet known. Convers rattled off ways in which the two board members can make a difference.

The two new board members can ensure that the annexation process is monitored.

She said the two new board members can see what happens during executive sessions, introducing some transparency into the board’s operation. They can assure the voters that the annexation process will be monitored. They can also have a voice in preventing a change in law to affect zoning or future annexations.

Convers said Rabbi Joel Loeb has strongly supported their efforts to expose what she calls “the wrongdoing and corruption of the current leadership in both the village of Kiryas Joel and the town of Monroe.” She said the KJ Committee for Peace and Harmony led by Rabbi Loeb has “stood [with us] holding banners suggesting annexation is not good and that we wish to be good neighbors.”

Convers said United Monroe shares the committee’s sentiment “that we all need to live together peacefully and that everyone’s feelings should be taken into consideration when looking at future planning and future zoning and future development.”

Convers said many problems could be resolved if everyone sat around the table and came up with solutions. “However, the Kiryas Joel leaders have not offered us that opportunity.” She paraphrased village leaders’ threats as, “We are the population that is growing the fastest. Just get out of the way.”

She claimed the Kiryas Joel leaders have threatened to take over the Town of Monroe and rename it Glilos Kiryas Joel if the town doesn’t accept the annexation. According to her, they promised that “we are going to essentially take over your community and turn it into our community.”

This is not a functioning municipality. It’s an oligarchy.
— Emily Convers, president, United Monroe

Convers said the experience has been eye-opening and frustrating. “They will not responsibly manage 507 rural acres of land that we would like to keep as rural, single-family land,” Convers said. “That is the crux of the argument here.”

She said the present KJ leadership are not good stewards of the village they now govern. She pointed to how the village has multiple DEC and EPA violations on record.

Convers also said Kiryas Joels violates “just about every open meetings law on the books in New York state.” She said the village will not accept FOIL requests, does not respond to requests for information, and does not hold open meetings, whether for planning, zoning, or municipal business.

“This is not a functioning municipality. It’s an oligarchy,” Convers says. People outside the area find it surprising and even shocking, she said. “It’s just a fact that this municipality doesn’t follow rules.”

She spreads the blame around. The Department of Environmental Conservation made Kiryas Joel the lead agency for the environmental review of the annexation, and Governor Cuomo vetoed a bill that would have given Orange County a voice in that review. The environmental review has since been lambasted by 27 different independent agencies as flawed and incomplete, according to Convers’ nonprofit, Preserve Hudson Valley.

Preserve Hudson Valley has brought a lawsuit seeking to stop the annexation as have the county and nine other municipalities joining together. The state supreme court is considering hearing the two suits in one case for a single ruling.

At press time, neither the supervisor of the Monroe Town Board nor the spokesperson for Kiryas Joel had returned calls asking for comment.