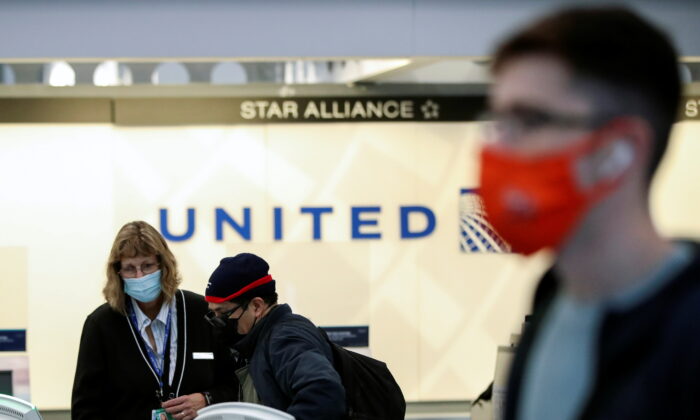 A United Airlines agent helps a customer check in for his flight at O'Hare International Airport in Chicago on Nov. 25, 2020. (Kamil Krzaczynski/Reuters)
Companies

United Airlines employees who are granted a medical or religious exemption have been informed that they’ll be automatically placed on unpaid leave, a policy that one expert described as the harshest in America.

In memorandums to workers who have applied for an exemption to United’s COVID-19 vaccination mandate, workers were told they must become fully vaccinated against COVID-19 within five weeks if their submission is denied or they will “be separated from the company.”

Employees whose accommodation requests are granted will be placed on leave for an undetermined amount of time, according to the memos, which were obtained by The Epoch Times.

“Given our focus on safety and the steep increases in COVID infections, hospitalizations, and deaths, all employees whose request is approved will be placed on temporary, unpaid personal leave on October 2 while specific safety measures for unvaccinated employees are instituted,” United told workers.

“We can no longer allow unvaccinated people back into the workplace until we better understand how they might interact with our customers and their vaccinated coworkers,” the company said, citing federal statistics that show a rise throughout the summer of COVID-19 cases and hospitalizations, although those metrics have fallen recently in some areas.

United, based in Chicago, informed workers in early August that they would need to get vaccinated against the CCP (Chinese Communist Party) virus unless they were approved for an exemption from the mandate.

The Air Line Pilots Association declined to comment on the new unpaid leave policy. Other airline worker unions, which have generally been supportive of vaccine mandates, didn’t immediately respond to requests for comment.

Roger Gannam, assistant vice president of legal affairs at Liberty Counsel, a nonprofit legal education and policy group, said the policy is the harshest the organization has seen in the United States so far.

“It certainly appears to be a bullying tactic and a continuation of United’s policy of making a religious exemption as difficult as possible,” he told The Epoch Times.

United workers who applied for exemptions have told Liberty Counsel that United asked a multitude of questions in an apparent effort to discourage the efforts. Workers who decide to file legal challenges will have a strong argument that the company isn’t using the least restrictive means to accommodate exemption requests, which is required by federal law, Gannam said.

Religious exemptions to the COVID-19 vaccines most commonly center on objections to how aborted fetal cells were used in the testing or manufacturing process. Medical exemptions typically include a physician’s recommendation that a person not get a vaccine due to a certain underlying condition.