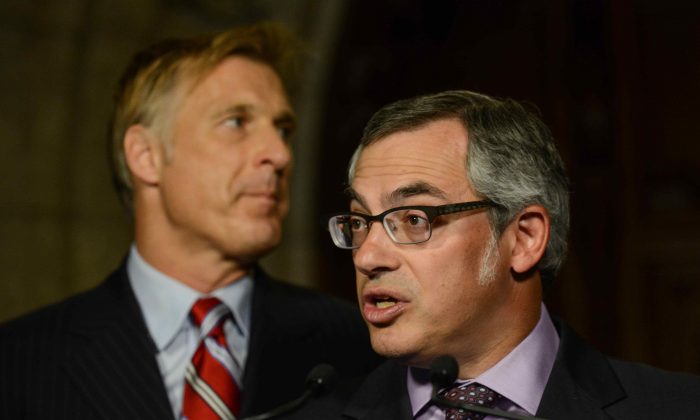 Treasury Board President Tony Clement announces changes to public sector sick leave as Maxime Bernier, Minister of State for Small Business and Tourism, looks on in the foyer of the House of Commons on Parliament Hill Monday. (Matthew Little/The Epoch Times)
Canada

Clement gets tough with the public sector
By Matthew Little

Midway through Prime Minister Stephen Harper’s majority government, it’s starting to become clear where he hopes to steer the country by the next election in 2015. It’s also becoming clear what one of the major battles of that election could be and why it could be helpful for the Conservatives.

A shrewd prime minister, as Harper is often seen to be, should have made his most risky moves by now—moves that don’t sell well to a fickle electorate but will prove their worth before 2015.

Harper has certainly taken his share of criticism for rolling back environmental protections that slowed resource development.

But by the time 2015 arrives, the changes will be old news, unless environmental catastrophes put them in a bad light. Barring that, however heated criticism may be, for less eco-inclined voters the Tories should be able to counter environmental attacks by touting a stable economy.

But Canada’s economy hinges largely on factors beyond its borders, and global economic uncertainty seems to be the new norm.

That may explain why, rather than moving toward legacy legislation or easy-to-sell measures meant to appease his most vehement critics, Harper seems to be preparing to face off with what he likely sees as a powerful opponent—Canada’s unionized bureaucracy.

There is no love lost between unions and the Conservatives. There are many reasons for that, but much of it comes down to an ideological divide between the two sides that plays out in contradictory positions on matters ranging from free trade to macro-economic policy.

The Tories have begun to capitalize on two common perceptions: that the public sector is inefficient and that unionized public sector workers get paid more and receive better benefits than most Canadian workers.

Those are numbers that work to the Tories’ advantage, which makes the unionized public sector an attractive political target as the government moves to shrink the public service and contain costs.

Evidence of how the Tories see the public sector comes from many sides. If you talk to well-placed bureaucrats, you will hear assorted stories about the mistrust between ministers and the public servants in their ministries.

But some signs are easier to read, such as two weeks ago when Treasury Board President Tony Clement announced a new mandatory system to track employee performance in the public sector.

“Complacency and the status quo are not an option. Excellence must be the benchmark. Canadians deserve no less,” he said in announcing the tracking system.

“Either poor performers improve and become productive employees or we will let them go.”

Clement painted the announcement as the government getting tough with the bureaucracy, a perspective that framed another announcement this week when he said there will be an overhaul of the sick leave system for federal employees.

Clement said the move would be good for taxpayers and workers, but it comes with a broad suggestion that employees are taking advantage of what Clement called an “archaic system” by staying home for an average of over 18 days a year.

In an odd coincidence, Clement made the announcement during National Public Service Week, which is intended to mark the importance of the public service. It seems to suggest that the government thinks rather little of the bureaucracy it employs.

Because unions consistently oppose Conservative policies, going so far as to rally support for the NDP and other parties during elections, the Tories see curtailing their influence as strategically sound.

By coincidence or design, two Tory private member’s bills further that cause. One from Russ Hiebert, now before the Senate and inches away from becoming law, will force unions to publish their expenses online.

The move is decried by labour as onerous and giving advantage to corporations and their management. Supporters say it will force unions to show how they spend tax-free union dues, which are sometimes used to fund political activities union members object to. Labour Minister Lisa Raitt has voiced her support for the bill.

The other, Bill C-525 by Blaine Calkins, would make it easier for union members to decertify the union and possibly more difficult for workers to form a union.

Those positions are echoed in policy resolutions for the upcoming Conservative Party convention scheduled to be held in Calgary in two weeks. The resolutions are possible party positions, and although many will fall away before the convention begins, several target unions.

One seeks to prevent mandatory union dues being used to fund political causes “unrelated to workplace needs,” while another would prohibit mandatory membership for unionized workplaces, which the resolution frames as a human rights violation for forcing association.

That last measure echoes right-to-work laws passed in the United States where Republican legislators have sought to curtail the influence of unions by allowing workers to work in unionized workplaces without having to join the union.

If the Conservatives have a problem with the unions that represent workers in the federal government and Crown corporations, the feeling is mutual, especially since the government legislated striking employees back to work at Canada Pacific Rail, Air Canada, and Canada Post.

Tensions will likely rise further when representatives from the Treasury Board start sitting at the bargaining table with Crown corporation managers and their unions, a dramatic change contained in the budget.

Previously, Crown corporations operated at arm’s length and their managers negotiated with unions independently. Under the proposed changes, the Treasury Board, which controls the government purse strings, will also be present at those negotiations, poised to set its requirements on unions directly.

Union leaders are suggesting that will lead to a collapse at the negotiating table and could unsettle Canada’s relatively harmonious labour relations where strikes are rare.

But if that is the case, and unrest grows, it could be a situation Harper would use to his advantage.

Because so much of the Conservatives’ credibility rests on Canada’s economic performance, any problems there could spell almost certain doom for the party in 2015. That is, unless their opponents stumble terribly during the election campaign.

But there is an alternative scenario, and a showdown with public sector unions could be just the thing the Tories need.

Given Canada’s dependence on foreign exports and the high interdependence of the global economy, Canada’s economy is, to a large degree, beyond the government’s control. If Europe tanks, or the U.S. stumbles, Canada will feel the blow and fallout will follow.

Harper’s opponents will lay any resulting job losses at the Conservatives’ feet. That holds doubly true if those job losses can be connected to Conservative policies. But even if they are not, ruling parties rarely fare well in elections during economic decline.

There is a notion that persists, despite some historians giving evidence to the contrary, that wartime leaders tend to be re-elected.

While Harper is not facing a war, he is cutting jobs, raising requirements, and trying to roll back benefits for a massive workforce of unionized public servants. And while his hardline approach of legislating employees back to work has been successful so far, that could change if the deals forced on unions are too bitter for their members.

In the unlikely event that Canada witnesses the kind of massive labour disruption many European countries see, Harper would probably suffer for it.

But if it is contained, and just dangerous enough to endanger the economy, and if Harper can lay the blame for it at the feet of “overpaid and inefficient” public employees, he would have a convenient scapegoat in the event of a struggling economy.