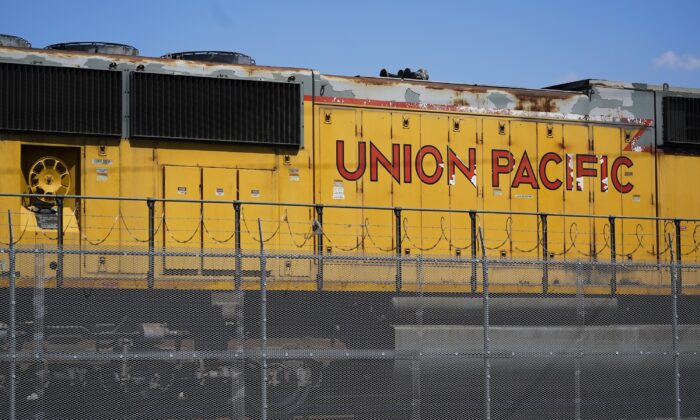 A Union Pacific train engine sits in a rail yard in Commerce, Calif., on Sept. 14, 2022. (Ashley Landis/AP Photo)
By The Associated Press

Union Pacific (UP) said its revenue grew 8 percent to $6.2 billion in the quarter as it increased prices, charged more fuel surcharges and delivered 1 percent more freight, but its expenses were up 14 percent at $3.8 billion.

UP Chairman and CEO Lance Fritz said the “revenue growth was more than offset by elevated operating expenses from operational inefficiencies and a higher inflationary environment.”

The results did not meet Wall Street expectations. The average estimate of seven analysts surveyed by Zacks Investment Research was for earnings of $2.75 per share.

Most key performance measures deteriorated during the quarter as the railroad continued to have a hard time hiring enough employees in key locations. The railroad’s average headcount is up 4 percent at 31,120 as it has been hiring throughout the past year, but it still needs more crews and maintenance workers in certain locations. Executives said about 600 additional workers are currently in training.

Union Pacific said freight car velocity declined 3 percent to 191 daily miles per car and locomotive productivity was down 5 percent during the quarter.

But Fritz said performance has improved in January and freight car velocity is now up around 210 daily miles per car. “Right now we’re operating pretty fluidly,” he said.

Edward Jones analyst Jeff Windau said he anticipated the ongoing hiring challenges and pressure from fuel costs that were up 43 percent. The weather impact was the surprise in the results. Going forward, the staffing situation should improve as UP hires and trains more workers and fuel prices will likely ease.

Investment manager Louis Navellier, who holds UP stock in his funds, said fuel costs clearly hurt the railroad’s bottom line. He said he had hoped the railroads might be able to pick up additional grain volume because the low water levels on the Mississippi River last fall limited how much barges could handle, but it looks like the railroad didn’t have much capacity to take on that business.

Heading into 2023, the railroad said it still expects shipping volume to grow faster than industrial production, but the current forecast calls for industrial production to be down by half a percent this year amid recession fears. UP executives said the economy remains too uncertain to predict how much volume might grow this year.

Fritz said he expects the railroad’s performance to continue improving in 2023. The key now is demonstrating to shippers that UP can regular deliver their cargo on a more regular schedule. Just last month, federal regulators ordered the railroad to prioritize grain deliveries to Foster Farms in California to ensure it had enough feed for the millions of chickens and hundreds of thousands of cattle it takes care of. Foster Farms said the dire situation had improved by mid January.

“Our job is to demonstrate to our customers that we are reliable. That this level of service—you know we’re still going to have some things happen. It’s an outdoor factory—but that we snap back quickly from whatever those events are and we are highly reliable,” Fritz said.

Union Pacific will also be working this year to find ways to address some of the quality-of-life concerns workers expressed during last fall’s contract fight about the demanding schedules they face and the lack of paid sick time.