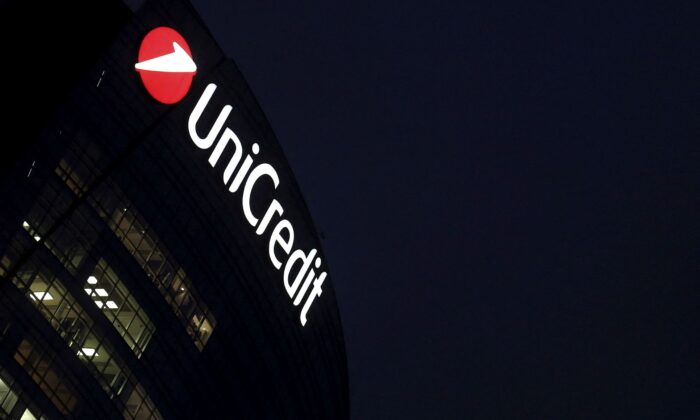 The headquarters of UniCredit bank is seen in downtown Milan, on Feb. 8, 2016. (Stefano Rellandini/Reuters)
Companies

UniCredit Flags up to $8 Billion in Losses on Russia, Prudent on Buyback

MILAN—Italy’s second-biggest bank UniCredit said a full write-off of its Russian business, including cross-border exposure, would cost around 7.4 billion euros ($8.1 billion), leaving its capital distribution plans hanging by a thread.

UniCredit, which is one of Europe’s banks most exposed to Russia, said it would still be able to pay proposed cash dividends for 2021 even in an extreme scenario where it zeroed its exposure.

That would shave two percentage points off a key capital ratio, which stood at 15.03 percent at the end of last year—lowering it to just above 13 percent.

Provided this key measure of financial strength stays above 13 percent, UniCredit said it remained committed to buying back its own shares for up to 2.58 billion euros under the strategy new CEO Andrea Orcel announced in December.

“Whilst we do not consider this extreme scenario as our base case, we are taking a prudent and sustainable approach to our distributions,” UniCredit said.

UniCredit said it would provide quarterly updates on the up to 200 basis point impact, and if the ultimate capital hit was smaller than its worst-case scenario it would use up to an equivalent amount for the share buyback.

“The buyback (or at least part of it) could now be delayed pending clarity on eventual Russian-related losses,” Jefferies analyst Benjie Creelan-Sandford said.

Orcel’s payout pledge had lifted UniCredit shares to a near four-year high of 15.85 euros a share last month, before tensions over Ukraine mounted.

The stock closed up 6 percent at 9.017 euros on Tuesday, having lost more than 40 percent from last month’s highs.

Analysts had warned Russian exposure cast a shadow over Orcel’s payout plans, which in turn are a key element in the former UBS banker’s M&A strategy.

Before Russia invaded Ukraine, Orcel had been poised to launch a takeover offer for smaller rival Banco BPM in an all-share deal that aimed to capitalize on the stock price recovery, sources have told Reuters.

UniCredit Bank Russia, its local arm and Russia’s 14th largest lender, had risk-weighted assets of 9.4 billion euros at the end of 2021.

“Net of foreign exchange hedges, our direct exposure to UniCredit Bank Russia is reduced to around 1.9 billion euros,” it said.

UniCredit could also potentially suffer an up to 1 billion euro loss due to its derivatives exposure to Russian banks under the extreme scenario. ($1 = 0.9173 euros)