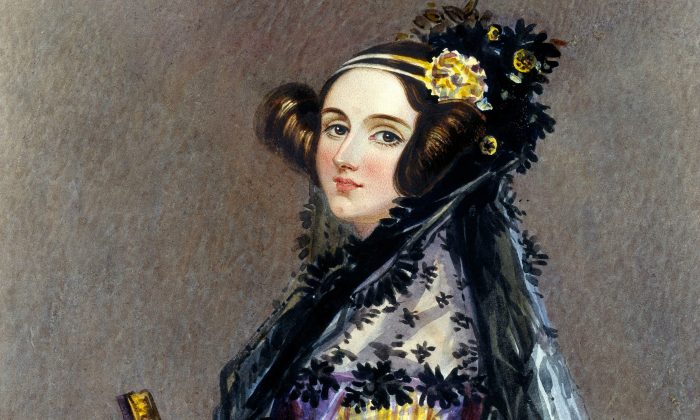 Computer programming had a more romantic, artistic start than one might expect. It begins with an eccentric tale, including a famous poet, a brief love, a daughter forced to scorn her father’s artistic ways, and other dramatic nuances.

Ada Byron was born in 1815, the only legitimate child of the famed poet Lord Byron. Her mother contemptuously separated from Lord Byron only several weeks after Ada was born. Lady Byron ensured Ada was schooled in mathematics, because it would “provide a stable mental state and a good antidote to the ‘heedlessness, imprudence, vanity, prevarication and conceit’ that Ada was bound to have inherited from her immoral father,” wrote Clement Falbo, professor emeritus in mathematics at Sonoma State University in his book “Math Odyssey 2000.”

It was a time when intellectual pursuits among noblewomen were not often encouraged. The young Byron, however, managed to slip into lectures at the University of London during the few months they opened to women in 1830.

Her mother’s efforts to stamp the poetry out of her soul failed to a certain degree. Ada never met her father, but she inherited his imagination and creativity. Though she geared her mind toward science, she spoke of a “poetic science.” She deemed herself an analyst and a metaphysician.

Her brilliance for mathematics and engineering caught the attention of famed inventor Charles Babbage. The two met for the first time when Byron was still a teenager and they corresponded for many years thereafter on a variety of topics.

Byron married Lord William King, who became the Earl of Lovelace, making her Ada Lovelace. Now with three children, in 1843, she translated a paper on Babbage’s unfinished invention, the Analytical Engine. The notes she wrote to accompany the translation, at Babbage’s suggestion, were longer than Babbage’s paper and earned her fame.

“In these notes she outlined the fundamental concepts of computer programming, and she described the main elements that would be needed in any computer language,” Falbo wrote. She made suggestions for calculations the engine might make, and these suggestions are now considered the first computer program. Lovelace saw the potential for what we would now call a general-purpose computer.

Lovelace also foresaw the possibility of computer-generated music. In 1979, the U.S. Department of Defense named a software language for her, “Ada.”