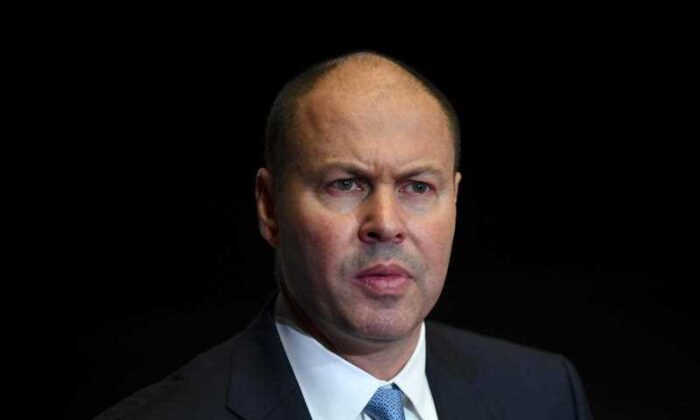 Australian Treasurer Josh Frydenberg speaks during an address to the Australian Chamber of Commerce and Industry at Parliament House in Canberra, April 29, 2021. (AAP Image/Lukas Coch)
Australia

Unemployment Rate Needs to Start With a Four: Treasurer

The Australian government will not be making a sharp pivot towards austerity despite the strengthening economy because the nation is “not out of the pandemic yet,” says the Treasurer.

Treasurer Josh Frydenberg used the pre-budget speech on Thursday to reveal the shift in budget policy to focus on job creation and reducing the unemployment rate to below five percent.

Massive fiscal spending programs to protect the economy during COVID-19 brought the level of federal government debt to a point where it may take a decade before it starts to decline.

However, Frydenberg said they would not begin tough austerity measures to repair the budget because COVID-19 still posed a threat to the global and Australian economy.

The Treasurer had previously set a target for six percent before beginning the budget repair process, but the economy has been recovering much faster than initially anticipated.

Unemployment currently sits at 5.6 percent, and economists and the Treasury have been keeping an eye for an upwards spike after the JobKeeper wage subsidy ended last month. However, Frydenberg said the number of people on income support has actually fallen by around 46,000.

“While this is encouraging, we are not complacent,” he said. “We recognise that the COVID-19 pandemic is far from over and we know that some businesses and sectors are still doing it tough.”

In his speech, Frydenberg cited the century-low population growth, international border closure, close to zero interest rate, and the economic threat of COVID-19 as the reason for remaining in the first phase of the economic and fiscal strategy.

“We will not move to the second phase of the fiscal strategy until we are confident that we have secured the economic recovery,” he said. “We first want to drive the unemployment rate down to where it was prior to the pandemic and then even lower. And we want to see that sustained.”

The last time Australia maintained a period of below five percent unemployment was from the 2006 mining boom leading up to the global financial crisis.

Both the Treasury and the Reserve Bank found that unless the jobless rate reaches 4.5 to 5 percent, the nation would not be able to experience an acceleration in inflation and a rise in wages. Based on this analysis, the Treasury’s economic modelling and forecasts were remade.

“In effect, both the RBA and Treasury’s best estimate is that the unemployment rate will now need to have a four in front,” Frydenberg said.

The budget is due for release on May 11.