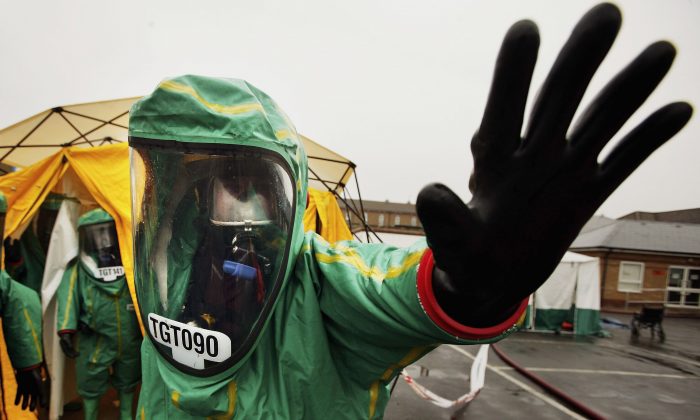 Emergency services exercise their abilitys in tackling a major contamination incident at Mayday hospital in Croydon, England, on April 23, 2006. The exercise involved decontamination units with representatives from ACHES (Association of Casualty and Health Emergency Simulators) playing the parts of the casualties. (Bruno Vincent/Getty Images)
Good to Know

In medieval times, plague was known as the “black death” and resulted in millions of Europeans dying. Plague still persists in many areas, with the highest annual burden of disease in Africa. The advent of antibiotics means that milder versions of plague can be treated. But according to the World Health Organization (WHO), pneumonic plague is still one of the most deadly infectious diseases. If someone contracts it, they can be dead within 24 hours. Health and Medicine Editor Candice Bailey spoke to John Frean, Head of the Center for Opportunistic, Tropical and Hospital Infections at the National Institute for Communicable Diseases in South Africa, about the deadly disease.

Why Is Plague Considered Dangerous?

Plague is a zoonotic disease caused by the bacterium Yersinia pestis. It is found mainly in rodents and is spread by fleas from rodent to rodent. It can also spread from rodents to humans and other mammals, including dogs and cats.

Rodents are susceptible to plague bacteria and usually become ill or die after they are infected. An outbreak of plague in rodents is recognized by an unusual number of rodents dying. In these situations, rodent fleas are more likely to bite and infect other animals or humans, as their natural hosts have died.

People are at risk of getting plague if they:

If plague is not recognized and treated promptly, it can produce potentially serious or fatal disease. In its pneumonic form, plague may rapidly spread from person to person, which could constitute a public health hazard.

How Does Plague Manifest in Humans?

There are three forms of the plague that humans can get, all of which are potentially deadly:

1. Bubonic plague: This happens after someone is bitten by a flea from an infected rat. There is a sudden onset of fever, chills, headache, weakness, and the swelling of lymph nodes (glands) near the bite site. The patient may complain of abdominal pain, nausea, vomiting, and diarrhea. If treated, symptoms resolve in three to five days. If untreated, the disease can become more severe and can be fatal. Complications may include bubonic plague progressing to septicemic or pneumonic forms, which could result in death.

2. Septicemic plague: This may arise as a complication of untreated bubonic plague but could be the first presentation of plague in a person. Aside from the fever, chills, extreme weakness, abdominal pain, and shock experienced with bubonic plague, septicemic plague can also result in bruises and bleeding in organs. Skin and other tissues—especially on the person’s extremities, such as the fingers, toes, and nose—may turn black and die.

3. Pneumonic plague: This can come about after bubonic or septicemic plague is not treated, but it can also develop when someone inhales infectious droplets from a patient with pneumonic plague. People who have pneumonic plague have a fever, headache, weakness, and a rapidly-developing pneumonia. They experience shortness of breath, chest pain, coughing, and sometimes bloody or watery sputum.

How Common Is Plague?

Plague has been reported in several African countries in the past decade. These include Madagascar, the Democratic Republic of Congo, Uganda, Mozambique, Malawi, Tanzania, Angola, Namibia, and Zimbabwe.

There is currently a plague outbreak in Madagascar that was first reported in December 2013. It is affecting humans and there have been more than 170 cases of bubonic plague and a single case of pneumonic plague reported.

The last case of human plague in South Africa was reported in 1982 in Coega in the Eastern Cape Province after being dormant for more than ten years. There were seven laboratory-proven infections and one death.

How Is Plague Diagnosed and Treated?

Symptoms of plague may start showing two to eight days after the person has been exposed to the organism.

Plague may be diagnosed through culture of clinical specimens. For example, pus from the swollen lymph node, blood, or sputum could be cultured. This takes a few days. There are rapid tests that can identify the presence of a specific plague antigen in these samples, but they are generally only available in high plague transmission areas. They are relatively quick.

Know Your Bugs—a Closer Look at Viruses, Bacteria, and Parasites

Signs of a Parasite Infection

Antibiotics are effective to treat all forms of plague and should be started as soon as possible to prevent complications. A vaccine is available for people at high risk, such as laboratory workers, but its effectiveness is not fully known.

Can Plague Be Prevented?

Rodent and flea control and monitoring of the wild rodent population are the main measures to monitor the risk of outbreaks. Rodents are trapped and tested for plague antibodies. Their tissues might be cultured if plague infection is strongly suspected.

If there is a positive result, public health measures are implemented to prevent humans becoming infected. These include insecticide spraying in and around dwellings to kill fleas. Rodent surveillance and elimination measures such as trapping and poisoning also take place. Rubbish cleanup is an important element of control as it reduces the availability of food and shelter for rodents.

Could NYC Rats Be a Harbor for the Plague?

A rat that was plague antibody-positive was recently trapped in the greater Johannesburg area in an informal settlement. Although the origin of the rat’s infection is unknown, plague typically survives at low or undetectable levels in wild rodent populations. A wild rodent flea may have been the source.

Public health measures were rolled out by the city’s environmental health officers and to date no further plague-positive rodents have been found.

South Africa has been a plague risk area for many years but the number of animal and human outbreaks dwindled to zero in the past 34 years, so the risk of a major outbreak is low. Environmental health officers are, however, alert to the possibility of new plague outbreaks.

John Frean is principal pathologist and head of the Center for Opportunistic, Tropical and Hospital Infections at the National Institute for Communicable Diseases in South Africa. This article was originally published on The Conversation.