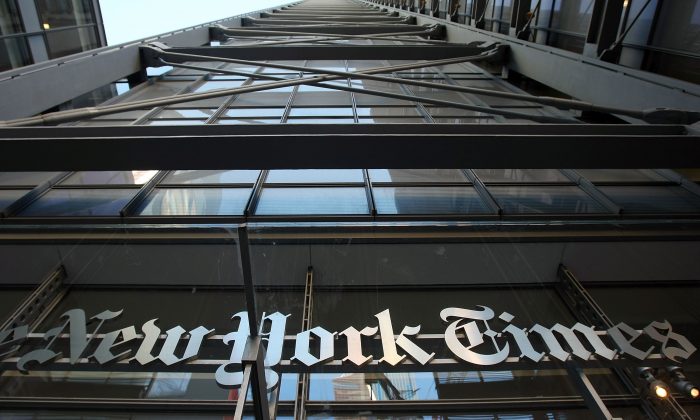 A video containing undercover recordings published by Project Veritas on Oct. 10 shows the political bias against President Donald Trump by one of The New York Times editors in its video department.

In the recordings, Nicholas Dudich, the Times’ Audience Strategy Editor for video, claims to have worked for the political campaigns of Barack Obama and Hillary Clinton and shows that he has no problem bringing his political bias into news stories.

When asked by an undercover reporter whether he can make sure his message is heard as a gatekeeper for videos at The New York Times, he replies, “my imprint is on every video we do …. so I like that.”

In a different recording Dudich quips, “I will be ‘objective.’ No I’m not. That’s why I’m there.”

During another segment, Dudich explains how he would target President Donald Trump, and what he calls Trump’s “dumb [expletive] of a son, Donald Jr., and Eric.” He says he would target Trump’s businesses and brand, to cause people to boycott Trump’s hotels.

Dudich admits his belief that by attacking Trump’s businesses and brand he could cause Trump to resign or “lash out and do something incredibly illegal, which he would have to.”

The undercover journalist presses Dudich on these comments, telling him to just make sure he puts those types of attacks “in the front.”

Dudich replies, “Oh, we always do.”

He also states his belief that Trump is a “threat to everything,” and admits that he re-entered journalism for his own advocacy, stating, “I saw the threat and I was like I want to do something, I can’t just do what I do because yeah, Trump was a threat and still is a threat.”

Project Veritas, a nonprofit that specializes in investigative news, says the video was the first in a series exposing bias at The New York Times.

The video is a continuation of its “American Pravda” series aimed at exposing bias in news organizations. It follows a three-part series on CNN, which among other things recorded an editor admitting the network pushes potentially false narratives in news stories for ratings.

Project Veritas points out that Dudich’s ties contradict the values that The New York Times claims to uphold. It quotes from its Sept. 2004 handbook on “Ethical Journalism,” which states, “Journalists have no place on the playing fields of politics. Staff members are entitled to vote, but they must do nothing that might raise questions about their professional neutrality or that of The Times.”

During a later segment in the video, Dudich also claims to have been a member of the far-left extremist group Antifa.

He also pretends that former FBI director James Comey is his godfather, yet Project Veritas shows that was likely untrue after interviewing his family members. The undercover reporter confronts Dudich on his alleged lie, which he admits. Project Veritas founder James O’Keefe states in the video that “We don’t know the truth. Perhaps someone out there can lock it down one way or the other.”

O’Keefe adds, however, that “the fact remains that Nick Dudich lies, and he is a gatekeeper at The New York Times.”

“If the Times can’t sniff out people like Nick Dudich—journalists with such questionable integrity and character—who else are they letting spread disinformation in their name?”, O’Keefe says.

He then hints at undercover videos still to come, adding, “is this more systemic? Does the Times lack journalistic integrity altogether? On that point, stay tuned. There are plenty more shoes to drop as our investigation into the New York Times digs deeper.”

New York Times spokeswoman Danielle Rhoades Ha said in a statement that the editor was a “recent hire in a junior position” who “violated our ethical standards and misrepresented his role.” She says that Dudich was in charge of reposting videos to other platforms and was not involved in creating or editing the videos. She states, “We are reviewing the situation now.”

The Project Veritas video is not the first incident that has raised questions about the news organization’s coverage of President Donald Trump.

The New York Times did not respond to an email inquiry for comments by press time.