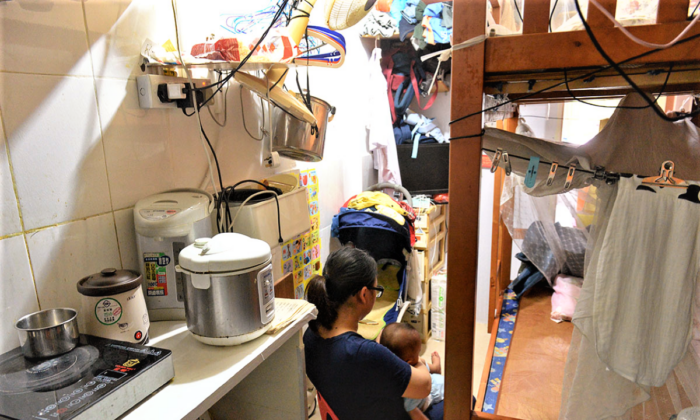 A woman and a child in a subdivided unit in Hong Kong on Aug. 3, 2022. (Sung Pi-lung / The Epoch Times)
HK Current Affairs

Under the Sweltering Heat, Owners of Subdivided Housing Overcharged for Water and Electricity

Some residents prefer to sleep in the park
By Duff Li

The weather in Hong Kong continues to be extremely hot, and the number of “hot nights” in July broke the historical record. Deputy director of the Society for Community Organization, Sze Lai-shan stated on July 31 that the Hong Kong poor, currently living in unsuitable housing such as subdivided flats and rooftop houses, complained that the indoor temperature was even higher than outdoors.

The extremely hot weather in Hong Kong has repeatedly broken records in recent years. The Hong Kong Observatory recorded more than 22 “hot nights” in July, breaking the record for the highest number of hot nights in a single month since 1884.

Sze Lai-shan and the former Secretary of Hong Kong Observatory, Lam Chiu-Ying were interviewed on July 31 by Hong Kong Commercial Radio. Lam mentioned that during the 1950s, only one or two nights in a year could be considered a “hot night,” so it did not have too much effect on people’s general living conditions.

Sze Lai-shan revealed that the Society for Community Association had previously surveyed the indoor temperature of unsuitable housing, such as subdivided units, rooftop huts, and modular shacks. The survey shows that these tenants suffer even more in hot weather. Indoor temperature is often higher than that outdoors, especially on rooftop houses which are often made from metal sheets that easily absorb heat.

She also criticized that since there are no independent electricity and water meters for these housing units, water and electricity payments are often determined by the landlord. Although the “Tenancy Control Ordinance” requires landlords to provide water and electricity bills for verification, up to 90 percent of landlords do not comply, according to her understanding, and the Ordinance is thus rendered useless.

Sze quoted findings of an earlier survey conducted by the Society. Regarding electricity, the current electricity charge for each independent meter is only about HKD 0.9 (US$0.11) per kilowatt-hour, according to the Electricity Company. Still, the Society found that the median payment of tenants of the subdivided housing is HKD1.6-2.0 (US$0.20-0.25) per kilowatt-hour.

Regarding water bills, the highest rate charged by Water Supplies Department is currently about HKD 11 (US$1.40) per cubic metre, but these tenants are paying as much as HKD13-15 (US$1.66) per cubic metre. It reflects the serious situation of overcharging for water and electricity usage by landlords of subdivided units, and the law cannot stop the situation. These tenants often pay 40 to 50 percent higher than the original price of electricity.

Sze went on to say that an average family used to earn about HKD20,000 (US$2,550) per month when their income source was stable. However, under the current pandemic situation, many workers in low-paying jobs do not get enough work or are unemployed, and their monthly income may fall to less than HKD10,000 (US$1,274) per month. Some cannot pay their rent, making their situation even more difficult.