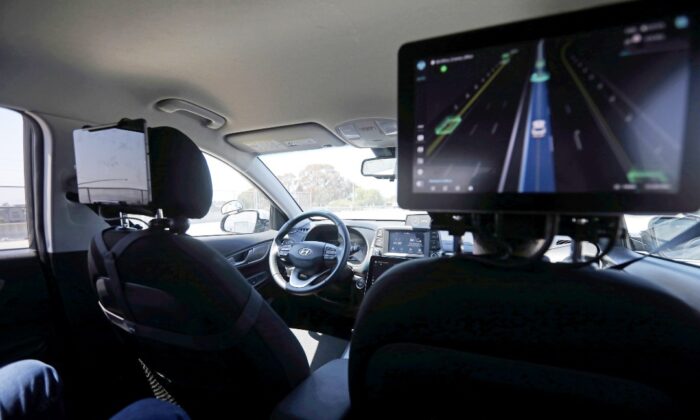 An empty driver's seat is seen inside a vehicle equipped with Pony.ai's self-driving technology during a demonstration in Fremont, Calif., on June 17, 2021. (Nathan Frandino/Reuters)
UK

Under New Rules, Drivers in Fully Automated Vehicles Won’t Be Responsible For Crashing

People using fully self-driving cars will not be responsible for any crashes under new proposed updates to The Highway Code, the government announced on April 20.

However, motorists must be ready to take back control when requested by the vehicle. Early forms of commercially available automation are primed to enter the market within the next year.

In a new amendment to The Highway Code, a new section for automated vehicles stated that “while an automated vehicle is driving itself, you are not responsible for how it drives, and you do not need to pay attention to the road. But you must follow the manufacturer’s instructions about when it is appropriate to engage the self-driving function.”

Also announced was that watching TV will be allowed in self-driving cars.

But to date, fully self-driving cars are a future technology. In the UK, there is no vehicle currently available for sale that is fully automated or “self-driving.” But there are some that have autopilot systems as well as advanced driver-assistance features.

The U.S. Department of Transportation rates a vehicle’s ability to self-drive from Level 0 (none) to Level 5 (fully autonomous). For example, Tesla Autopilot and Cadillac (General Motors) Super Cruise systems both qualify as Level 2. Level 5, which means a futuristic scenario where the vehicle does not need a driver to go anywhere ie. full automation does not exist yet.

Though when it does, self-driving cars could theoretically spell the end of motorists. That is according to Tesla boss Elon Musk.

“It would be like an elevator. They used to have elevator operators, and then we developed some simple circuitry to have elevators just automatically come to the floor that you’re at. The car is going to be just like that,” Musk told NVidia co-founder and CEO Jen-Hsun Huang at the technology company’s annual developers conference in 2015, as reported by Verge.

Musk suggested driving cars could be outlawed. “It’s too dangerous. You can’t have a person driving a two-ton death machine,” he said.

This year data and analytics company GlobalData predicted full autonomous vehicles (level 5) to begin production around 2030, with around 1 million level 5 vehicles produced in 2036.

“As the technology continues to develop and as more information is generated, a clearer timeframe on the rollout of truly autonomous vehicles will be seen. The process is still in its relative infancy, but insurers will be pleased to see a pathway for autonomous vehicles slowly come to the fore,” wrote GlobalData.

Last year, the UK government became the first country to announce it would regulate the use of self-driving vehicles at slow speeds on motorways, with the DfT announcing that it would allow hands-free driving in vehicles with lane-keeping technology—a feature found on new cars today—on congested motorways.

Even though fully automated vehicles are years down the road, they will profoundly change the nature of car insurance, particularly in the way insurers assess risk and set premiums.

A spokesperson for the Association of British Insurers (ABI) told The Epoch Times that an estimated 90 percent of road accidents are caused by human error that “if the tech can be developed in the right way, it can make roads safer for everyone.”

“If an automated vehicle in self-driving mode is involved in an incident, any innocent third-party victims, which include the driver or user-in-charge, have a right to claim against the motor insurer of the self-driving vehicle. The user-in-charge will still be liable in certain cases if they are found to be negligent in the use or upkeep of the system,” he said.

He added that the insurer will have the right to pursue a claim against any liable party in an event of a fault.

Questions have been raised for example what if someone is injured because a person ignored a self-driving car’s prompts to brake, would the insurer still be liable? Also, what happens if the software is faulty?

“The insurance industry stands ready to work with the Government and vehicle manufacturers to put in place an appropriate framework for the sharing of data as this will be crucial in determining liability and understanding the cause of an incident,” he said.

Daniel West, partner and head of product liability at Horwich Farrelly told the trade publication Insurance Business UK that in light of Wednesday’s announcement, motor insurance companies can no longer operate a “business as usual” mindset and should expect massive changes moving forward.

“It seems likely the law will adapt as the technology improves and as we learn more about the ability of users to disengage from different types of activities,” West said. “It is a hot topic for, amongst others, insurers and the legal profession.”