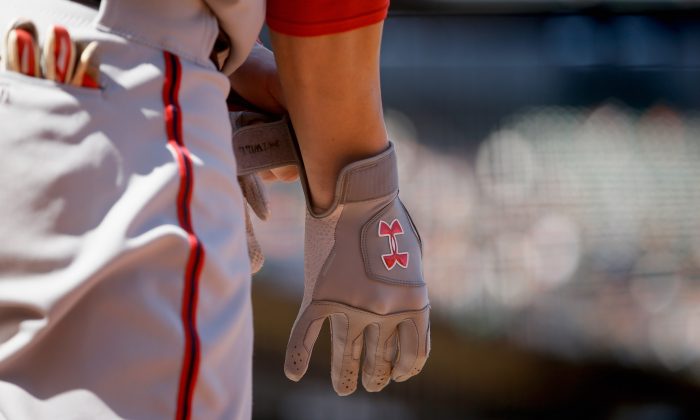 A detail shot of the Under Armour batting gloves worn by Bryce Harper #34 of the Washington Nationals during a May 22 game. Under Armour announced on May 5 an aggressive international growth plan, including an expectation of more than doubling revenue by 2016. (Ezra Shaw/Getty Images)
Business & Economy

Under Armour Steps Onto Global Stage

Specialty apparel maker Under Armour Inc. announced on Wednesday an aggressive international growth plan, expecting annual sales to reach $4 billion by 2016, which is more than double its revenues last year.

The company known for making moisture-wicking performance apparel and football, soccer, and baseball cleats is making a bid to challenge bigger rivals Nike Inc. and Adidas AG by introducing plans to expand its market share outside of North America.

At Under Armour’s investor conference—its first in over two years—on Wednesday in Baltimore, CEO Kevin Plank called international expansion the company’s “biggest opportunity” and said Under Armour has been “working like crazy” towards that goal.

As a start, Under Armour will seek to outfit certain athletes in the 2014 Sochi Winter Olympics, as well as the 2016 Summer Olympics in Rio de Janeiro. It already reached a deal to outfit U.S. women’s and men’s gymnastics teams.

In addition, it’s in the process of opening ten offices outside of the United States, and by the end of this year, it seeks to have more offices abroad than domestically.

Under Armour’s sales have been on an upswing. Revenues increased by 25 percent in fiscal year 2012, while only 6 percent of that came from outside North America, an indication that international expansion is a prime opportunity.

Global Landscape
Currently, Under Armour is a relative unknown outside North America. Internationally, sports and team apparel is dominated by Nike and Adidas.

The biggest way to market Under Armour is through sponsoring international teams, especially international soccer, the biggest sport draw in the world. For years, Nike and Adidas (which also owns Reebok) have dominated sponsorships of the most popular soccer teams.

Under Armour, in comparison, sponsors only one team in the English Premier League, the Tottenham Hotspur. The Spurs are Under Armour’s only household-name sponsorship.

But as the company indicated, foreign marketing spending will soon ramp up as the company readies its international capabilities. Under Armour CEO Kevin Plank told the Wall Street Journal earlier this year that the company has invested heavily in supply chain logistics to ensure it can deliver its products more widely. “We feel like we’re in probably year seven or eight of that [ten-year] commitment and understanding that it’s something that’s not going to happen overnight,” Plank said in the report.

The question will be whether Under Armour has pockets deep enough to compete with Nike and Adidas. Nike, as of the end of the year, disclosed in a SEC filing that it had almost $4 billion in remaining sponsorships to be paid. In order to compete, Under Armour will need to pick and choose its markets, teams, and athletes carefully.

Growth Play
In April, the company raised its 2013 full year guidance to $255 million in operating income on top-line revenues in the $2.2 billion range.

Year to date, shares of Under Armour (NYSE: UA) have soared almost 27 percent. Its price-to-earnings ratio (PE) of 54 is far above rival Nike and make the stock look expensive. Its operating margins have fluctuated in recent quarters, and going forward its aggressive expansion plans and marketing expenditures are expected to weigh heavily on earnings.

All of these factors mean that Under Armour’s execution of its new international growth strategy needs to be solid.

New Marketing
In Feb. 2013, Under Armour took the first step in its global marketing strategy by unveiling the “I WILL” campaign, in an event in New York headlined by boxing champion Canelo Alvarez, baseball star Bryce Harper, and NBA player Kemba Walker.

While the slogan sounds like a direct response to Nike’s motto “Just Do It,” Under Armour maintains that it is a continuation of its brand identity. “Ten years ago Under Armour became a household name when the brand asked athletes everywhere to ‘Protect this House.’ The response in the iconic commercial, and throughout the years, has been the same: I WILL,” said Plank in a statement.

Another market Under Armour has invested in is women’s apparel. This is an area that was not traditionally a forte of the company but now accounts for just under a quarter of its sales.

Speaking at its investors conference, Plank called its women’s product line “a powerful driver for growth” that will continue to see investment in the future. Under Armour has been developing athletic performance technology specifically for women, in its Studio yoga line, aimed directly at yoga-apparel maker Lululemon Athletica Inc.

During the recent Lululemon recall—due to transparency concerns of certain yoga pants—Under Armour took advantage by releasing an ad campaign containing the tagline, “We’ve got you covered.”

On Wednesday, New England Patriots star quarterback Tom Brady appeared on CNBC Television with Plank to talk about why he switched from Nike to Under Armour. “I looked around our locker room, what was going on in high school with the younger kids and the kids playing ‘Pop Warner,’ and it was all Under Armour,” Brady said, stating that the younger generation of football athletes preferred to outfit themselves with Under Armour’s apparel.

Now, all Under Armour needs to do is replace football with soccer, and Brady with Lionel Messi.