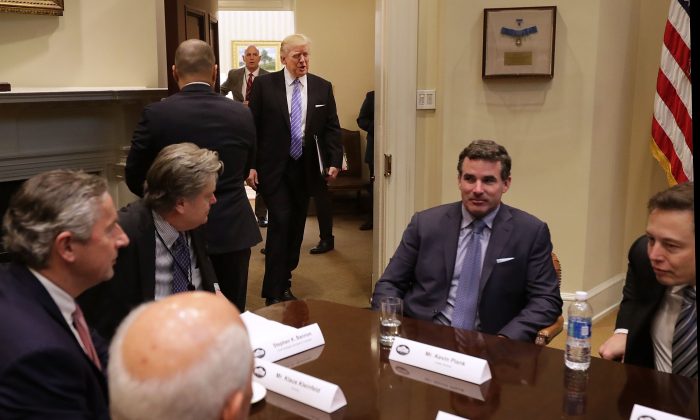 President Donald Trump walks into the Roosevelt Room for a meeting with business leaders, including Under Armour CEO Kevin Plank (2nd-R), at the White House on Jan. 23, 2017. (Chip Somodevilla/Getty Images)
Business

Under Armour CEO Kevin Plank praised President Donald Trump for his pro-business position during an interview with CNBC‘s Scott Wapner on Feb. 7.

Plank was part of the American Manufacturing Council delegation, which was recently invited to the White House to discuss bringing manufacturing back to the United States—something Plank is passionate about. Plank launched a new production facility in Baltimore last year, and the brand’s first women’s clothing line is also produced domestically.

In that business context, Plank shared his impression of Trump: “I think he’s highly passionate. … To have such a pro-business President is something that’s a real asset for this country. I think people should really grab that opportunity.”

“He want’s to build things. He wants to make bold decisions. He wants to be decisive. And I’m a big fan of people who operate the world of ‘publish and iterate,’ Plank said.

Plank has said before he believes a lot of the problems in cities like Baltimore, his hometown, boil down to a lack of jobs, which aligns with Trump’s pledge to bring jobs back to United States.

Plank’s praise diverges from criticism directed at Trump in recent weeks from leaders of companies like Ford, Starbucks, and Lyft over his executive order to temporarily bar entry into the United States from seven Muslim-majority nations deemed “countries of concern” by the Obama administration.