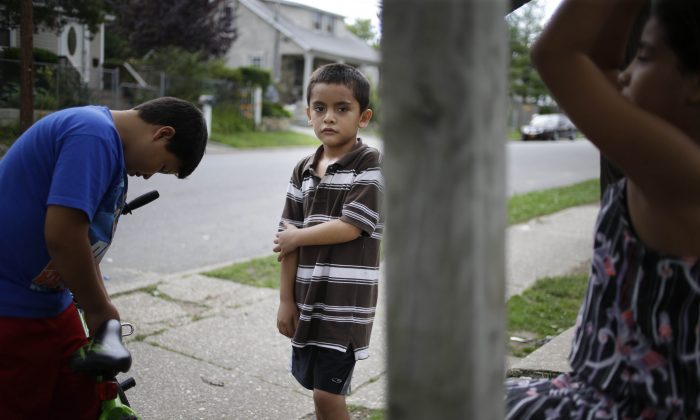 Kevin Torres, 7, plays with neighbors in the front yard of his apartment building in Huntington Station, N.Y., on July 17, 2014. Torres arrived in the United States, unaccompanied, from El Salvador in May 2014. The New York City Council is concerned that unaccompanied children scheduled to appear in immigration court are going to be left without legal representation. (AP Photo/Seth Wenig)
New York

NEW YORK—Many of the child migrants who fled to the United States to escape violence in Central America are now appearing before immigration judges without legal representation.

City Council held an oversight hearing Monday to address the recent influx of unaccompanied minors into the country.

It previously announced that it would allocate $1 million from its fiscal year 2015 budget to legal organizations that provide free representation and other social services to these children.

Private foundations also matched the allocation with $900,000 in donations.

But City Council members and immigration advocates still expressed worry that more had to be done to help these children, many fleeing from unrest and gang violence in Honduras, El Salvador, and Guatemala.

In mid-August, the federal government ordered immigration courts to expedite the legal proceedings for these children, creating a “surge docket” that would allow them to appear before immigration judges much sooner than the years it typically takes for deportation hearings to go to court.

An unaccompanied minor now must have a first hearing scheduled no later than 21 days after the Department of Homeland Security files a charging document for the child.

To date, 1,077 unaccompanied children have been scheduled to appear in New York City immigration court, according to the Legal Aid Society’s testimony at the hearing. About 51 percent of the children on the surge docket have legal representation.

Unlike criminal courts, immigration courts do not provide lawyers to those who cannot afford one.

Immigration Judge Robert Weisel testified that some children who have appeared in court without a lawyer are younger than 5 years old.

Council member Rory Lancman, who is chair of the newly created Committee on Courts and Legal Services, noted that many of the children may qualify for “special immigrant juvenile status,” which allows children who have been abandoned, abused, or neglected to stay in the country legally.

But since the minor must first be declared eligible for such status in family court, Lancman suggested creating a “surge docket” at family courts to make those children’s cases go smoother.

To date, 4,799 unaccompanied minors have been placed with family members and other sponsors in New York state, according to the office.